Afosiomeni Stin Teleoteta. Lustrous Metal Coating's secret of success might be Greek to most people and that’s okay.

The Greek phrase is emblazoned on Lustrous’ logo and is one of two mottos that the Canton, Ohio-based company is built around. The translation is “dedicated to perfection.” The other motto is universal —  the customer is always right. 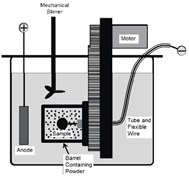 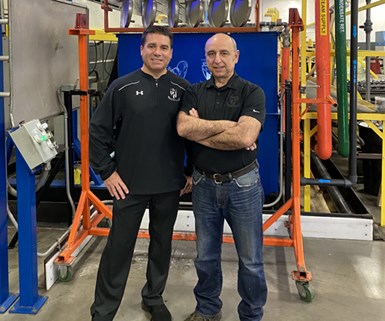 These mottos and their inherent values have propelled Lustrous Metals onto the Products Finishing Top Shops list all six years the survey has been conducted. Lustrous joins just a handful of other plating shops that share that distinction.

Mike Paxos credits his father for instilling the values Lustrous is built upon and for cultivating his interest in plating.

For over 40 years, Paxos’ father and uncle ran a successful plating shop with manual hoist lines. When Paxos was as young as 11, he’d go to the shop and work after school and on weekends. Paxos was learning the trade and solidifying the foundation for his future.  Paxos, with his father’s blessing, eventually decided to open his own plating shop.

In addition to the long-held values, Paxos management style is one that cultivates creativity and innovation.

“My philosophy is to not micromanage our employees,” Paxos says. Paxos’ acquisition of various businesses has brought unique brainpower to the operation. Paxos then turns loose that knowledge, so it flows throughout the Synergy7 ecosystem.

“We try to keep a laid back environment and encourage our employees to cross-train throughout our diverse operations. It allows us to get fresh ideas with the ability to get “fresh eyes” on the different operations,” Paxos says.

Another unsung component of the company’s success isn’t something you’ll find on a rack or in a barrel. That component is the city of Canton.

“Canton is a hidden jewel. We have many of the amenities of a bigger city, but still have the charm of a small town. The local government offices have been very active in keeping the town prosperous when many similar towns have died,” Paxos says, adding that the Pro Football Hall of Fame’s location there adds to the energy and, in fact, Lustrous has done some equipment work for the NFL.

Paxos is still awed by the journey. “When my father encouraged me to go on my own over 30 years ago, I could only dream that I would have a business that would allow me to go from a meeting with an automotive engineer to one with an NFL owner,” Paxos says.