Former “Almen Strip Czar” Jeff Derda is thriving in retirement—but was still willing to take some time to talk about shot peening and Almen strips. 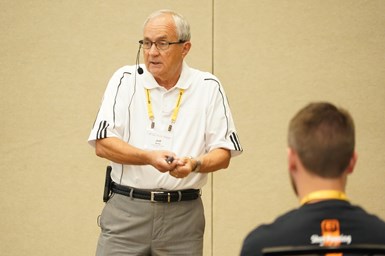 Retirement hasn’t slowed Jeff Derda, the “Almen Strip Czar” of the shot peening industry. While Derda retired in 2019 from Electronics Inc. (EI; Mishawaka, Ind.), the company where he gained his reputation as an expert on Almen strips, he is still one of the most knowledgeable people in (or currently out) of the industry. Over the course of his career, Derda transformed EI into a leading manufacturer of Almen strips — high-quality diagnostic tools for shot peening.

What is an Almen strip?

“A basic explanation of an Almen strip is that it is a thin strip of 1070 steel, about 3 inches by 0.75 inch, used to measure how hard shot is hitting the surface of a part being shot peened,” Derda says. This is an explanation he practiced for nearly 15 years at trade conference courses and private business classes. “For those who aren’t clear on what shot peening is, shot peening is a blasting process in which media — primarily steel, ceramic or glass — is propelled against a metal surface, causing indentations that result in compressive stresses that significantly increase the fatigue life of a part. In other words, it makes the parts last longer.”

Returning to Almen strips, Derda says that “Almen strips measure shot peening intensity, which is how hard media is impacting a surface, so that people can verify that their shot peening machines are delivering consistent, repeatable results that meet a customer’s specifications — that’s the key.”

In 2005, Derda was EI’s engineering and operations manager. One of his primary duties was to develop a large-scale process for manufacturing more accurate, reliable Almen strips — which he accomplished with the help of others at EI and a great team of suppliers. Derda and his team then went on to develop a program that, for more than 12 years, tested and recorded the performance of these Almen strips under various conditions, parameters and intensities. They also created a procedure to performance test the material used to manufacture the Almen strips. These performance tests were a major step for ensuring the accuracy and reliability of EI’s Almen strips.

Even outside of the classroom, however, Derda and EI freely shared this research data with anyone who asked. “The phone calls were constant,” Derda recalls. “We cataloged over 3,000 pages of data on Almen strips based on all of the tests, and we shared specifics with anyone who called.”

Becoming an expert of retirement

“The years that I spent at EI were the best years of my career,” Jeff recalls, “thanks to the incredible people with whom I worked. We had a lot of fun. We believed that we had the best product in the world. But I have to say, nothing beats retirement!”

Indeed, Jeff has kept busy becoming an expert on the Indianapolis 500. He now has time to speak about the history of the race, as opposed to Almen strips, at nearby Rotary and Kiwanis clubs. In addition, he annually speaks about the race at the Indiana high school were his son is a history teacher.

This year has also been Jeff’s first as the volunteer president of the board for the nonprofit Morse Waterway Association, which promotes and preserves safety on the Morse Reservoir just north of Indianapolis.