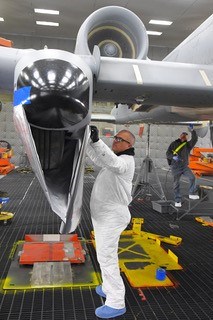 Corrosion-control technicians seal up the seams and holes in a first-production A-10’s outer surface skin to prevent blast media from entering the aircraft. (U.S. Air Force photo by Todd Cromar)

The new paint removal process is accomplished by two robots, each with four hose attachments that move independently along both sides of the aircraft. The time to strip an A-10 has decreased from three days to 9-12 hours. The A-10s require regular exterior maintenance to protect their metal surfaces from corrosion due to moisture and the harsh environments in which they continually operate.

“There are going to be across-the-board improvements, including a dramatic reduction in exposure to a hexavalent-chromium dust environment. This is perhaps the greatest benefit to the robotic system,” said Tim Randolph, director for the 576th Aircraft Maintenance Squadron. “Savings will also be seen with reduced operating time and less power consumption, as well as reduced costs in material. We really haven’t found a downside to this system.”