Failed maskings can be a common problem for finishing operations. Custom Fabricating & Supplies (CFS) of Franklin, Wisconsin is an innovative company on a mission to help prevent masking failures. CFS started off in a small office in downtown Milwaukee, but grew rapidly. By 2005, CFS was doing increasingly more custom work and had doubled in size. Currently located in Franklin, Wisconsin, CFS is an ISO 9001:2015 supplier of performance component die cuts, gaskets, silicone caps and plugs, custom rubber molded parts and tape masking products for the finishing industry.

In November 2019 at the Fabtech metal forming, fabricating, welding and finishing tradeshow, CFS unveiled its Patent Pending Vented Plug design which creates a path for air pressure to escape while simultaneously maintaining a liquid-tight seal. Brian Asik, national sales manager for CFS and invertor of this design, explains, “Plugging and/or capping parts that are connected to a large cavity has always been challenging due to the air pressure that builds up during both dry off and cure oven bake cycles. ” In many instances, this pressure is great enough to blow the plug or cap off of the part resulting in a masking failure.

To prevent this type of failure the part must be vented. Historically this has been accomplished simply cutting a slit in the masking plugs or caps to act as a vent. Unfortunately, this method can also lead to other masking failures. These types of failures are most commonly found during wash cycles as well as submersion processes like e-coat and plating. During the e-coat process, parts are submerged and those makeshift vents can leak, resulting in wash or coating getting inside the part. In some situations, this fluid could then slowly leak from the vent onto the part and create severe adhesion issues.

To address the problem, CFS developed a patent-pending two-piece plug design that acts as a one-way vent. The vent allows air to escape as needed while keeping all wash and coating out. The outer part of the design works like a standard plug and can be custom-made to plug or cap any size or geometry.

Brian Asik, national sales manager for CFS, had the idea for the vent plug after noticing a similar feature on a blender he bought for his wife. Asik observed how this feature allowed for air to be drawn out while using negative pressure to then create a liquid-tight seal. CFS adapted the concept by substituting water pressure to help make the liquid-tight seal. Pressure inside the part would activate the vent, which then seals itself after the air is vented.

“If there’s no air coming out, then the vent seals itself,” says Asik. “It doesn’t leak the way that traditional vented plugs typically can.” 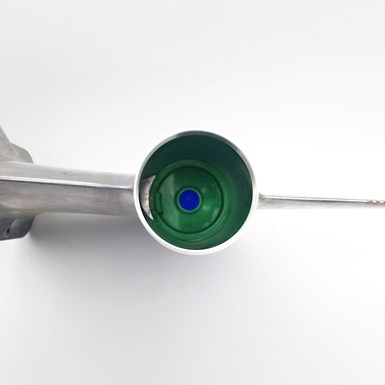 CFS’s patent pending vent plug was recently used to replace a cumbersome, mechanical masking solution for outboard engines. This part required a bit of finessing to insert and required the use of an impact wrench to apply enough force to expand the rubber enough so that it created a seal strong enough to overcome the air pressure. The high pressure exerted on the mask reduced its life cycle and required it to be replaced on a monthly basis. In addition, the mask had a 30% failure rate. The introduction of CFS’s vent plug reduced application time by 75%, saved 50% on the masking costs and extended the life expectancy of the mask.

Since the vent plug’s introduction at Fabtech 2019, CFS has been working with production facilities to implement the solution across the country.