Gaining Traction to be a Great Finishing Operation

Burkard Industries, located near Detroit, was the Products Finishing’s Top Shop in 2018 for liquid and powder coating operations, using a management book to help them improve.
#management #marketing 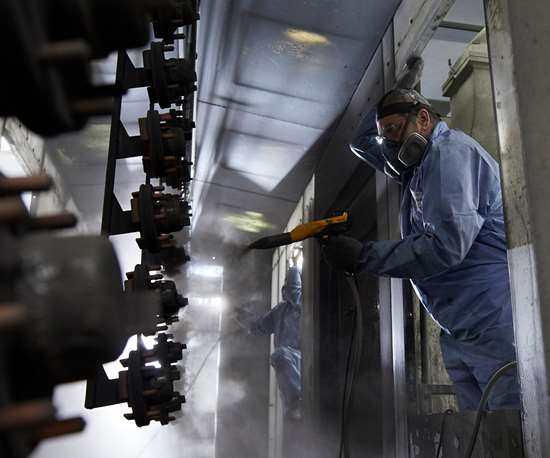 With an order lead time of 1.3 days, the shop came in at 99.989 percent in the on-time delivery category.

Owning a finishing operation can often be a lonely and uphill road to walk. Thankfully for Jay Burkard, he has found the ‘traction’ that gets him to the places he wants to be.
The owner of Burkard Industries was Products Finishing’s featured Top Shop in our benchmarking survey for liquid and powder coating operations in 2018, after finishing near the top of the list in each of the past three years.

But managing the 150-plus employee operation is more than just applying base and topcoats. For Burkard, a fourth-generation owner of the company, getting the company to where it needed to be operationally required him to do some outside-of-the-box thinking.

“We’re always looking at where we are strong and what we need to be working on,” he says. “It’s a continual process for us, because we are always trying to be the best in the business. As an owner, you know what level you want your organization to be, but it is difficult sometimes to get everyone onboard with it.”

Three years ago, Burkard instilled a new management system based on a business book, “Traction,” by Gino Wickman. It touts the use of an “Entrepreneurial Operating System” for companies to achieve success. Wickman writes that there are six areas a business needs optimized to run smoothly and be profitable—vision, people, data, issues, process and traction. He says that those are achieved when organizations execute well and know how to bring focus, accountability and discipline to their company.

“Due to fear and lack of discipline, the Traction component is typically most organizations’ weakest link,” Wickman says in the book. “You’re spinning your wheels and you need traction to move again.”

Burkard was given the book by his close friend, Ted Davis, and now swears by the principles. He instituted the Traction philosophy across the board at the company.

“All of our management meetings are based on Traction, and our performance indicators too,” he says. “We were doing a lot of this before, but we just made the case to formalize it and make it a complete part of our company.”

Burkard says that once he and his management team understood the frustrations and began working to overcome them, it made their organization function at a much higher level and operate more efficiently.

“It’s funny to say, but we did get more traction to get changes made, if needed, and improvements installed,” he says. “There has been a definite improvement that we see every day, every week and each month.”

For example, in management meetings, any given assignment is clear-cut and documented to help avoid confusion and deadlines. These are simply called “To-Dos,” and everyone on the team is on the same page with what is expected for the assignment. At quarterly management meetings, some personnel are given larger assignments, which are called “Rocks,” and completion is expected in that quarter. Burkard staff liked the idea and system so much they even came up with their own terminology for second- and third-tiered staff meetings where projects are called “Pebbles,” as the assignments might be smaller than the Rocks given to bigger quarterly projects.

“To-Dos are either done or not done, and there are no excuses,” Burkard says. “We keep very detailed statistics, to see who has the most assignments and who completes them on time and has the highest completion rates. If it’s not done, it carries over and the work mounts.”

Exemplary On-Time Delivery, Quality
The “Traction” system has worked extremely well for Burkard. With an order lead time of 1.3 days, the shop came in at 99.989 percent in the on-time delivery category, which looks at when goods are delivered in the time frame committed.

With more than 17,000 shipments from the facility, that equated to just 18 late orders in the past year, which is a remarkable achievement.

Burkard Industries also uses a 23-point score card on key indicators that is posted weekly to show how the operation is performing and the areas that need improvement. Those quality control measures give them a 99.8 percent first-pass quality yield rating—one of the best in the industry.

The shop utilizes a Plex enterprise resource planning (ERP) system that allows Burkard management to monitor and evaluate numerous operations and functions in the facility. It would be a daunting task to do by hand with so many employees and processes going on at the plant.

“One of Plex’s strengths is its quality module, which includes quality check sheets that pop up and must be completed before a container of parts can physically ship,” Burkard says.  “We are just now starting to use the HR module, and are in the process of streamlining our employee review process by implementing it. Our preventative maintenance system is also moving from a stand-alone program to Plex.”

Burkard’s great-grandfather started the company in 1934, originally as a casket builder, later moving into zinc die casting, and, finally, as an electroplating operation. They discontinued that process in 1988 when hard-chrome plating lines became a regulatory issue, and much harder to manage and maintain. The shop instead focused on powder-coating applications and, in 2003, added electrocoat. More recently, Burkard Industry invested heavily in chemical agent-resistant coatings (CARC) for military processes.

Jay Burkard started at his family’s company in 1997 after a 10-year career in management with Ford Motor Company, joining his father, John, in running the operation. Jay set out to diversify the shop’s offerings, and to streamline processes while setting extremely high quality and operational goals.

He started as the shop’s quality manager, then moved up to general manager in 2000, where he has essentially been running the operation. In 2007, Jay took over the presidency of Burkard Industries from his father, and his management methods have certainly paid off. Burkard Industries has been measured as one of the best-run finishing operations in North America over the years in the Products Finishing Top Shop Benchmarking Survey.

A Complete Top Shop
In the first year of the survey in 2015, Burkard Industries finished third overall, a spot they repeated in the 2016 survey. In 2017, the shop placed fifth overall in the total metrics, and last year climbed back to capture the No. 1 spot.

“We take the Top Shops Benchmarking Survey very seriously,” Burkard says. “Our management team has a two-day meeting at the beginning of every year to develop our business strategies, and we review Top Shop benchmarking data, as well as our own internal score-card metrics to analyze our strengths and weaknesses. We develop that year’s business plan, which includes continuous improvement activities with specific measurable objectives.”

The company spends about 12 percent of gross revenue on new equipment and fixtures, a practice that Burkard believes helps keep the shop running smoothly and efficiently. The company has about 160 active customers, and coated approximately 60 million parts in 2017.
Burkard says automotive components account for 65 percent of their business and military comes in second at 15 percent.  The remaining 20 percent is from various industries, including aerospace, commercial retail and heavy truck.

“Most of our parts are automotive, such as bumpers and sunroofs,” Burkard says. “We try to instill in our employees, ‘Would they be proud to have the parts they finish on their own vehicle?’ If your employees ask that question of themselves honestly, you always know you’ll be producing great products.”