LumiShield recently conducted a demonstration of its Lumidize aluminum electroplating process at the 100-gallon scale, signifying the technology’s readiness for production-scale plating.

LumiShield Technologies (Pittsburgh, Pa.) has reached a milestone with an aluminum electroplating process it calls Lumidize. Since its inception, the company has experienced steady growth and has been touting the benefits of its process for a few years. LumiShield recently conducted a demonstration at the 100-gallon scale, signifying the technology’s readiness for production-scale plating.

Lumidize is a low-toxicity aqueous process designed to serve as an effective replacement for common surface preparation technologies that are based on heavy metals and phosphates. According to LumiShield, the process can plate aluminum oxide onto virtually any conductive substrate, particularly carbon steels. The resultant electroplate (0.1 mil or less) forms a hard barrier layer, maximizing adhesion and improving corrosion resistance.

“When you take a steel surface and Lumidize it, you first deposit aluminum on its surface, which then very quickly gets oxidized to a fully adherent layer of aluminum oxide,” says LumiShield president Dave Luebke.

Luebke says the aluminum-oxide coating produced is noncorrosive and allows for improved adhesion and the ability to chemically bind to epoxy and urethane topcoats without the need for phosphate or primer. “The surface is rough, allowing for good physical adhesion of organic coatings, and it is terminated in a layer of hydroxyl groups, which are good points of attachment for epoxies and urethanes,” he explains. “You get chemical attachment of the oxide onto the steel surface and you get chemical attachment of the paint to the Lumidized surface — so, you effectively chemically bond your coating to the surface of the steel.” 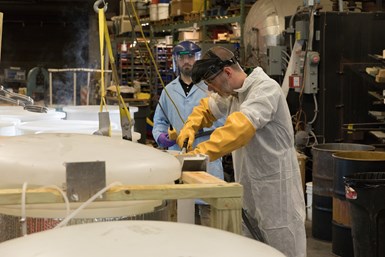 LumiShield’s process requires only standard preparation prior to electroplating. Here, Luebke rinses the process vessel to be Lumidized following acid activation of the surface while Woodyard controls the hoist used to transfer it from tank to tank.

LumiShield conducted a 100-gallon demonstration of Lumidize with Epiphany Solar Water Systems (Pittsburg, Pa.), a company that builds solar powered water desalination and purification systems. Epiphany’s systems are used to create drinking water from salt water and to reduce the volume of industrial waste brines. In doing so, Epiphany’s systems run at 250º F and are constantly processing highly corrosive liquids (fully saturated acidic brine that is around 32% salt). To resist this corrosive environment, the system’s process vessels are coated with an abrasion-resistant, chemical-resistant, ceramic-laden epoxy coating from Sherwin Williams. While the coating provides good protection, Epiphany was having trouble with it adhering to the steel substrate of the process tanks in a consistent manner.

“One of the issues is getting coatings on the metal that will tolerate that kind of water quality,” says Tom Joseph, CEO & CTO at Epiphany. “It requires a very specific surface profile to stick to the substrate with any kind of reliability. [Lumishield] was able to control that surface profile in the coating process.”

LumiShield constructed a 100-gallon Lumidize line on site at Epiphany for a demonstration. Joseph says the process worked well on test articles and was used to coat process tanks that are being tested in the field. In addition to providing the necessary adhesion, Lumidize broadened Ephiphany’s window for the application of the tanks’ protective epoxy coat. In the past, the tank surfaces would be sandblasted to a specific surface profile and the first coating of epoxy would need to be applied quickly to avoid oxidation of the steel.

“[Lumidize] provides an oxidation barrier that extends your coating window to days instead of hours,” says Joseph.

Reaching the 100-gallon threshold is significant, as it marks Lumidize’s transition from R&D phase to commercial-scale plating readiness.

“In scaling up from five gallons to 100 gallons, we had to solve all sorts of problems that you don’t encounter in the laboratory — scaling on the steel, issues of mass transfer, unlike materials welded together,” says Luebke. “Still, it only took us seven or eight tries to go from never having plated above five gallons to implementing a working line, which shows how robust the process is and how easy it is to adapt it to a new set of conditions.”