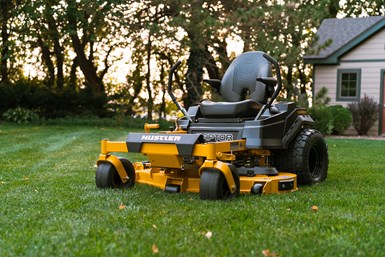 Excel Industries Inc. (Hesston, Kansas) is, if you’ll forgive the pun, on the cutting edge of mowing equipment. In 1964, the company partnered with inventor John Regier and began production of the world’s first twin-lever zero-degree turning radius mower — the Hustler. Today, the company continues to create outdoor equipment under the Hustler Turf Equipment and BigDog Mower Co. brands and has a global distribution network of more than 2,000 U.S. dealers and 30 distributors worldwide.

The company installed a new pretreatment system in August of 2019 to replace outdated equipment. The original washer was proving to be undersized for the company’s increasing workload and unable to run advanced pre-treatments. 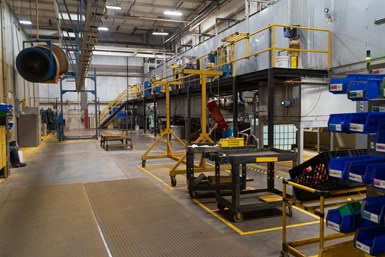 “Our old eight-stage washer system was designed to run at a maximum of nine feet per minute,” explains Johnny Kotek, powder coating supervisor at Excel Industries. “As we increased production rates, we needed the capability to go up to possibly 14 feet a minute.”

According to Kotek, the company was also experiencing some adhesion issues. The original washer’s first stage was an alkaline bath and parts with doubler plates welded together would allow the alkaline to seep into the crevasses. The alkaline would then boil out and dry on the part while in the dry off oven, ultimately causing paint defects and peeling.

“We wanted to have the first stage be more like a ‘wetting zone’ versus a true alkaline cleaner so we wouldn’t have any chemical creep inside the doubler plates,” Kotek says.

Excel Industries selected Therma-Tron-X Inc. (Sturgeon Bay, Wisc.) to install a brand new 10-stage washer. The solution added two additional stages and set the stage for the desired improvements. However, Excel Industries began to experience some problems as they worked to dial in the chemistries for the washer system. At stage five of the pre-treatment, an acid pickle was being used, which was causing some problems with flash rusting.

“We had to raise our temperature and concentration to attack certain parts to get them clean, but by going that high, we realized that in a normal spray process like this, at this line speed, it was exceeding the limit,” explains Kotek. “We’d have line stops and it would create a lot of flash rusting.” Removing the flash rust was adding labor costs and introducing the potential for defective parts in the event the rust made it to the paint booth.

The company turned to Chemetall ( New Providence, N.J.), the Surface Treatment global business unit of the Coatings division of BASF, for a solution to the problem. “Running an acid deoxidizer at high temperatures for cleaning was causing dry down on the steel,” Ladd Ojala, business development manager for Chemetall, says. “Whenever you get dry down on the steel, that’s when flash rust can present itself.”

Chemetall proposed changing the chemistry in stage five to a neutral pH descaler. The company’s SCN-9194 is a neutral pH corrosion remover based on organic phosphate technology. It runs at a pH of 7 and is effective at removing weld smoke, which can cause adhesion issues. Chemetall ran a series of test panels for Excel Industries and was ultimately awarded the business. Steve Brentz, Chemetall district manager, stresses the importance of “constant communication and updates on quality and testing” in the company’s approach to the project.

“We were able to remove the weld smoke at a neutral pH,” Ojala says. “This basically solved the flash rust issue. Typically, you’d have to run an acidic product at a pH of 3 at that stage and then if you get any dry down, flash rust, of course, will be a major issue on any line.”

Chemetall also contributed some mechanical solutions as part of its overall support of the project. “We call it our MOC strategy — mechanical, operational and chemical,” Ojala says. The company installed an oil coalescer on the stage two alkaline bath that skims the oil off the top and provides a longer bath life. Two large glass media sand filters were also provided to remove iron from the conversion coating bath in stage nine.

Excel Industries has been running the new washer system with the updated chemistry since May. “Our new process has drastically improved our quality of paint adhesion,” Kotek says.