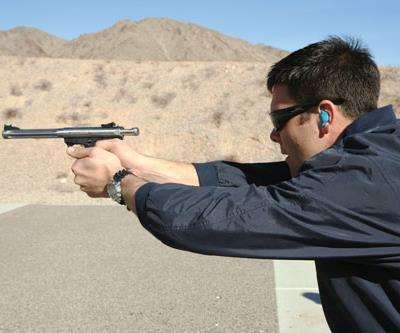 No one needs to tell John Thompson, lean production manager at the Sturm, Ruger and Co. plant in Prescott, Arizona, that firearms are a booming industry in the U.S.

Thompson has lived it and worked it. He has seen his company open up new manufacturing operations in the U.S., and witnessed growth at its Arizona operation, including a new black oxide coating line built in late 2015.

“Business has been good,” Thompson says. “The whole market has gone through a big jump.”

About one out of every five firearms sold in the U.S. is made by the Sturm, Ruger and Co., which most gun enthusiasts simply know as Ruger, the largest manufacturer of sporting weapons in the U.S.

Guns sales nationwide rose from 4.5 million units sold in 2007 to roughly 8.6 million by 2012, according to U.S. government numbers. Most of the surge in Ruger’s sales—from $144 million in 2007 to $679 million by 2012, an almost 375 percent jump—has been through marketing efforts to introduce new and existing gun owners to shooting sports such as target shooting.

The National Shooting Sports Foundation in Connecticut studied demographics of new gun owners and found them to be young and female. About 67 percent of the new owners were between the ages of 18 and 34, and nearly 37 percent were female.

Ruger wanted line operators in a separate room from the black oxide line, which required a shuttle system that enables parts to be racked and sent into the coating line.

“The women’s market is a force in our industry, and manufacturers, retailers and shooting ranges are making changes to their products and services to satisfy women’s tastes and needs,” says Jim Curcuruto, the NSSF’s director of industry research and analysis.

Ruger is the largest manufacturer of sporting weapons in the U.S.​

After a slight cyclical dip in sales in 2014, Ruger is coming back strong in 2015. A recent financial report by the company saw that in the second quarter of 2015, net sales increased 3 percent and earnings increased 14 percent from the first quarter of 2015.

As the only full-line manufacturer of U.S.-made firearms, Ruger says it offers consumers more than 400 variations of more than 30 product lines. But all of that demand has caused some growing pains at Ruger’s manufacturing operations. The company opened its third manufacturing plant in a 220,000-square-foot facility in Mayodan, North Carolina, which added to its existing operations in Newport, New Hampshire, and Prescott, Arizona.

Among other expansion and renovation projects, Ruger hired CJI Process Systems in Santa Fe Springs, California, to design, construct and install a new black oxide coating line in its Prescott facility in 2015 to help handle increased production demands and to improve safety at the plant.

Ruger was impressed with the CJI software package installed in the system.

Thompson says that the facility, which employs more than 600 people in sales, engineering, manufacturing and finishing, previously had a hand-operated black oxide line that needed major upgrades and efficiency improvements.

“The old line was really outdated,” he says. “We really wanted to go toward a fully automated line, and we wanted better environmental controls and a safety improvement, too.”

The latter was one of the biggest reasons that Thompson and the rest of Ruger management wanted to build the new line; they recognized an inherent danger of having employees work around the heated black oxide tanks, and wanted to eliminate those risks if they could.

“We just didn’t want anyone to get injured around those tanks,” Thompson says. “When you have 300 degrees of sodium hydroxide, it can be pretty dangerous. We decided we wanted to separate the operators from the tanks as much as possible.”

The process began with an addition to the existing plant that would handle the new black oxide line and contain the wastewater treatment operations.

The new line was designed to coat all types of Prescott-manufactured hand gun parts. Those coated parts included barrels, slides, magazines and numerous smaller internal parts of a firearm.

Thompson and others from Ruger’s production teams interviewed the companies and asked questions about design techniques, equipment, installation practices and other areas to formulate a “scoring matrix” system to grade the companies before deciding which to hire for the project.

Each company was asked about various aspects of their business operations. When the Ruger team tallied the score, CJI Process Systems came out on top.

“We were very impressed with the software package that they had to install on the system,” Thompson says. “And we also were impressed by how knowledgeable their people were. It came across very clearly that they knew what they were doing.”

Every tank has sensors that autofill if needed, plus monitor the recirculation and filtration systems.

One of the challenging features that Ruger requested was to have the line operators in a completely separate room from the black oxide line, which would require a shuttle system design that would enable parts to be racked and then sent into the area housing the line to be coated.

“We really wanted to have only our technician and the maintenance department to have to go in and be around the chemicals,” Thompson says. “We wanted to keep the people doing the racking and unracking in a separate area away from the actual line.”

Ruger had several large windows built between the racking area and the black oxide line so the process could be observed, but otherwise it was a completely automated system without the need for human contact.

“We’ve never really had a major incident here with anyone getting hurt, and we wanted to keep it that way,” Thompson says. “We’ve had a few small burns and such, but we didn’t want to wait until something major happened. It was at the top of our priority list to avoid that.”

CJI Process Systems designed the line so that two small parallel racking stations on rails enters and exits the coating room at a perpendicular angle, with a clear plastic door closing once the stations are set into the line, thereby closing off the employees from the black oxide line.

Ruger went with a different heating system than the gas-fired tanks it had; CJI brought in Parker Boiler for the project.

Ruger used a two-step process in its previous coating line in Arizona, but wanted to go to a one-step with the new black-oxide line. Ruger also wanted to switch chemical suppliers to go with Massachusetts-based Heatbath Corp., which had been working on other Ruger facilities.

“We did a lot of testing with Heatbath to make sure we were going to get same results, if not better than we had been getting,” Thompson says. “And we found we were getting better results, so we were happy to make the switch and have Heatbath in all our facilities.”

The previously used two-step process had firearms being dipped into each of two black oxide tanks, but the new system has one tank that does the trick.

Jerry Krywicki, vice president of sales at Heatbath Corp., says his company has worked with Ruger at its East Coast shops in North Carolina and New Hampshire, but he worked directly with the Arizona plant to help get the new line up and running.

“We helped Ruger start up the North Carolina plant, but we’ve gone back a long time with them in New Hampshire and their other facilities,” Krywicki says. “We wanted to get all the lines working very much in sync to deliver the same results.”

Unlike most parts being blackened during the coating process, Heatbath had to face some unusual challenges to meet the high expectations set by not only Ruger, but also by customers who purchase the firearms.

“We are fully aware that some Ruger customers look at their firearm as if it is a piece of jewelry,” Krywicki says. “It really is a beautiful piece of craftsmanship. It is a machined part with a black oxide conversion coating, but the customers really look at the fit and finish of it very closely, so we had to meet and exceed those expectations of being flawless.”

That line uses Heatbath’s Makerclean 3546, a heavy-duty, non-phosphated emulsifying alkaline soak cleaner that Krywicki says has a long operating life and can be used in black oxide, plating and phosphate lines.

Pentrate Ultra Liquid, Heatbath’s black oxide coating, is used for a deep black finish on steel. Krywicki says it produces a uniform black oxide finish with no rub off or dimensional change. Its low drag out reduces operating costs and contains rectifiers to control colloidal iron build up in the bath.

Ruger is also using Heatbath’s Pen Dip A, which is a water displacing oil that Krywicki says is recommended for use when a dry-to-the-touch finish is required. This oil is a barium-free product for providing good corrosion protection.

No Bleed II is a hot oil used in another tank to displace entrapped or absorbed blackening salts from deep crevices or joints of steel assemblies after blackening. Krywicki says adding this product eliminates carbonate bloom or bleed.

The new line was designed with a dissolved air filtration system; a clarifier injects dissolves air into the clarifier tank, which helps pull oil out of the system.

Every tank now has sensors that autofill if needed, and monitor the recirculation and filtration systems. Ruger also went with a different heating system than the gas-fired tanks it had; working with CJI, it brought in Parker Boiler to manufacture a newer system, two Parker T1460R high-efficiency hot water boilers, with modulating firing with 300°F and 125 PSI trim.

Parker also built a TAV1224 vertical air separator; TEH2460 139-gallon expansion tanks that are all rated for 150 psi and 450°F; as well as three Burks end-suction centrifugal pumps rated at 275°F air cooled and 400°F water cooled, all with 5 hp TEFC motors.

“There’s going to be a lot more efficiencies all the way around,” Thompson says.

Originally published in the February 2016 issue.