Spikes of Graphene Can Kill Bacteria on Implants 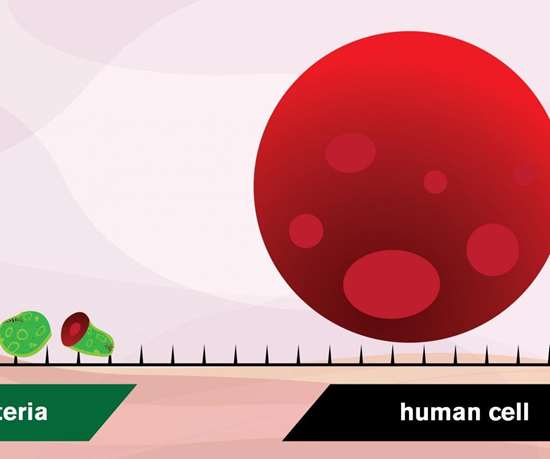 Vertical graphene flakes form a protective surface that makes it impossible for bacteria to attach.

A tiny layer of graphene flakes becomes a deadly weapon and kills bacteria, stopping infections during procedures such as implant surgery. This is the finding in new research from Sweden’s Chalmers University of Technology recently published in the scientific journal Advanced Materials Interfaces.

Operations for surgical implants, such as hip and knee replacements or dental implants, have increased in recent years. However, with such procedures comes a risk of bacterial infection. In the worst-case scenario, this can cause the implant to not attach to the skeleton and therefore require removal.

Bacteria travel in fluids such as blood, looking for a surface to cling to. Once in place, they start to grow and propagate, forming a protective layer known as a biofilm.

A research team at Chalmers has now shown that a layer of vertical graphene flakes forms a protective surface that makes it impossible for bacteria to attach. Instead, bacteria are sliced apart by the sharp graphene flakes and killed. Coating implants with a layer of graphene flakes can therefore help protect a patient against infection, eliminate the need for antibiotic treatment and reduce the risk of implant rejection. Osseointegration—the process by which the bone structure grows to attach the implant—is not disturbed. In fact, the graphene has been shown to benefit the bone cells.

Chalmers University has been a leader in the area of graphene research, but biological applications did not begin to materialize until a few years ago. The researchers saw conflicting results in earlier studies; some showed that graphene damaged the bacteria, others that they were not affected.

"We discovered that the key parameter is to orient the graphene vertically. If it is horizontal, the bacteria are not harmed" says Ivan Mijakovic, a professor in the department of biology and biological engineering.