Products Finishing recently lost one of its own. Jerry Poll was a well-loved figure in the surface finishing industry who led our brand for many years.
#nasf #finishinghalloffame

Products Finishing recently lost one of its own. Jerry Poll was a well-loved figure in the surface finishing industry who led our brand for many years.

Poll was editor of Products Finishing magazine through four decades, and was an invaluable supporter of the finishing industry who organized a number of annual conferences. He started as assistant editor of Products Finishing in 1954 and later became editor, where he interviewed managers and owners of countless finishing facilities to tell their stories in the pages of PF.

Poll eventually became the magazine’s publisher and was active in trade and technical organizations associated with industrial plating, as well as painting and powder coating, and served on committees and boards of the American Electroplaters Society (AES) and the Metal Finishing Suppliers Association (MFSA).

Products Finishing publisher Todd Luciano tells how Poll’s influence endures to this day. “I was fortunate enough to have started my career with Products Finishing when Jerry’s legacy was still very strong within the electroplating community and witnessed first hand his celebrity status when attending SUR/FIN. 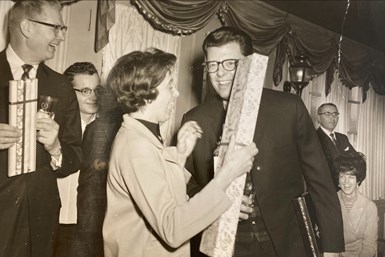 “You couldn’t walk 10 feet without someone calling his name or Jerry stopping to chat with old friends,” says PF publisher Todd Luciano of Poll’s popularity at industry events.

Rick Kline Sr., chairman of Gardner Business Media, parent company to PF, remembers Poll’s years of service to the brand, “Jerry was a fantastic leader, mentor, advisor and confidant. He made me a better person through his example.”

Products Finishing magazine has a legacy dating back to 1936, and Poll played a large role in continuing to adhere to the publication’s original mission. In a 1971 editorial Poll wrote of marking the magazine’s 37th year by looking back at the promise published by founder Don Gardner in the very first issue, which was to “assume the task of searching out and disseminating the newest and best information available concerning metal finishing, in all its various ramifications.” Poll took the legacy forward through his years with the brand and passed it on to those following in his footsteps.

“Although Jerry retired shortly after I came into the company, I considered him a mentor in my early years with Products Finishing, and very much appreciated his guidance and encouragement as I navigated the industry,” Luciano says. “Jerry was fundamental in the success of Products Finishing and his impact on not only our brand, but the metal finishing industry in general, will live on for years to come.”