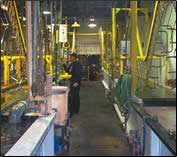 National’s dipsy plating line takes parts for a roller coaster ride at speeds of 24 to 36 fpm.

National’s dipsy plating line takes parts for a roller coaster ride at speeds of 24 to 36 fpm.

One of National’s high-volume jobs is producing leges and other components for barstools for a customer that supplies the hospitality industry.

One of National’s high-volume jobs is producing leges and other components for barstools for a customer that supplies the hospitality industry.

Parts exit the tin cobalt bath, which deposits an alloy of roughly 80% tin and 20% cobalt to duplicate the appearance and corrosion resistance of decorative chrome.

Parts exit the tin cobalt bath, which deposits an alloy of roughly 80% tin and 20% cobalt to duplicate the appearance and corrosion resistance of decorative chrome.

Two barstool legs are hung every 6 in. for tin cobalt plating, a line density six times higher than the one part every 18 in. used for chrome plating.

Two barstool legs are hung every 6 in. for tin cobalt plating, a line density six times higher than the one part every 18 in. used for chrome plating.

The city of Aurora, IL, may be best known as the hometown of Wayne Campbell and Garth Algar, comic co-hosts of the cable access show “Wayne’s World” that began life as a “Saturday Night Live” sketch and wound up on the big screen. But long before Wayne and Garth came on the scene, Aurora was a center of industry.

One manufacturer that has called the city home for more than 60 years is National Metalwares LP. The company processes 24,000 tons of steel a year, starting with bright or commercial matte steel coil to produce a variety of tube cross sections. National’s 190,000 sq ft plant houses 210 employees who use four CNC benders, 4 tube mills, CNC benders, punch presses, swagers, three robotic welding cells, and related equipment to produce custom steel tube to customer specifications. Final finishing includes two powder paint lines and a plating line. Using 12 to 24-gage steel, the tubemills manufacture rounds from 0.500 to 1.500 in. diameter; rectangular sections to 1 × 2 in.; 0.500, 0.812 or 1.000 square tube; and oval cross sections 0.600 × 1.190 in. in size.

“We have a big presence in outdoor products, lawn & garden products, air compressors and seating applications in many different market segments,” says VP of Operations Michael Sullivan. “Probably 70% of products are powder coated and 30% are plated.”

Until 2006, National processed plated parts using a conventional decorative chrome process consisting of a hexavalent chromium deposit over bright nickel. Plating was handled on a “dipsy” line with a 1485-ft conveyor. The company and its customers were generally satisfied with the resulting finish, but process engineer Jim Sluder was casting about for a possible replacement for the hex chrome.

Even before new, lower permissible exposure limits recently mandated by OSHA, the handwriting was on the wall with regards to hex chrome, Sluder says. “Waste treatment was time-consuming,” Sluder recalls. “Even though we had evaporators recovering the chrome, we still had to dump our rinses occasionally. We had to destroy the chrome; that takes time. Plus, we had employees exposed to the bisulfates and other things we used to kill the chrome.”

The company looked at switching to trivalent chromium chemistry, but deposit color was an issue. “Trivalent has a tendency to be darker than hex chrome, and that was unacceptable to us,” Sluder says. “Maintenance costs on the trivalent chrome were also an issue.”

Sluder then took the next logical step, which was eliminating chrome entirely. What he found was tin cobalt, an alloy plating chemistry that was said to provide appearance and corrosion protection equal to decorative chrome. After some initial investigation, National tried tin cobalt chemistries from two suppliers.

The company started up a 400-gal pilot line. “Doing that allowed us to look at bath stability, process parameters and part quality we were getting from the tin cobalt,” Sluder explains. “We ran both baths for a while, to see which one was more stable and to make sure we could match the color of our chrome parts exactly. It was a learning curve over 3 or 4 months,” Sluder explains.

Eventually, National settled on a process developed by Pavco, Inc. (Charlotte, NC). Dubbed PavCoTing, the low-metal chemistry won based on long-term stability and color, according to Sluder. Pavco components were purchased through John Schneider and Associates Inc. (Mequon, WI), and the company has continued to provide support and analytical testing since installation of the new bath.

Translating the pilot process to production required removal of the old chrome system, fabrication of a new tank for the tin cobalt process, addition of extra counterflowed rinse tanks to minimize contamination of the new chemistry, and the transfer of evaporators from the old chromium process to the nickel bath.

“We didn’t want to drag in nickel, which would be a serious contaminant in the tin cobalt bath, so we added the extra rinses,” Sluder explains. “Also, we wanted to switch the evaporators we were using to recover chromium over to the nickel tank and close the loop on the nickel process.”

National employees fabricated the tin cobalt tank from carbon steel. It was then polymer lined per Pavco’s recommendations. Other parts of the old chrome process—cleaning, pretreatment and bright nickel plating—were left unchanged.

Plating begins when parts are conveyed into a 6,000-gal soak cleaner. This is followed by an initial electrocleaning stage, two rinses, electroactivation in a 10% sulfuric acid bath in a 4,000-gal tank, two more rinses, and a second electrocleaning stage to assure that welding slag and smut are completely removed from the parts. Both electrocleaning stages operate at 180 to 185°F. An acid predip activates part surfaces immediately before nickel plating in a 25,000-gal tank. The cleaning and bright nickel chemistries are supplied by MacDermid Inc. (Waterbury, CT).

After multiple rinses, parts head into the 3,750-gal tin cobalt tank, which runs at 100–120°F, a temperature essentially the same as the chrome process. “The tin cobalt probably takes about twice as long as chrome to make a comparable deposit thickness,” Sluder explains. “I could plate chrome in 20– 25 sec. The chrome tank was 2,500 gal, so this tank is half again the size. At our maximum line speed of 36 fpm, parts will be in the tin cobalt tank for 45 sec.”

The lower deposition rate of the tin cobalt alloy is more than offset by improved throwing power that enables higher part densities on the line, according to Sluder.

“We can run 3000 to 4000 sq ft through the system per hour,” he says. “For example, one of our high-volume jobs is barstool legs. Now we use new racks to allow hanging of two legs every 12 in. on the line. For chrome, spacing was one part every 12 in., so we have doubled the part density and we run the line at 24 fpm. We just couldn’t do that with chrome.”

Better throwing power also allows plating at drastically lower current densities than chrome. “For chrome, we’d run in the range of 2200 A total in the tank, or current density of about 100 asf,” Sluder recalls. “This process runs at 110 A total, 2.5 to 3 asf. So as far as electricity goes, there’s a pretty good savings.” The 3500-A rectifier used for chrome plating has been replaced by a 500-A unit, he adds.

Yet another benefit of improved throwing power is higher quality parts with improved coverage in holes and recesses, Sluder says. “With chrome, you’d always have areas that were yellow from the nickel. They were accepted because you just couldn’t do any better. But now we can cover those areas.”

Tin cobalt deposition is followed by a city water rinse, a DI water rinse, drying and unracking. Finished parts are either shipped directly to customers or further processed at National.

Maintenance of the tin cobalt bath is similar to chrome, according to Sluder. Key factors are metals concentration and pH. “We test at least twice a day for metals content and make additions either over the side or by metering in,” he reports. “Sometimes we meter in metals additions over a period of a couple of hours, which seems to work well.

“We were doing pretty much the same kind of testing on the chrome—not pH, but metal content and chrome/sulfate ratio. We didn’t have to add chrome as frequently, but on the other hand, when you drag chrome out you have to recover it.

“We’re using about five lb of tin and 6 lb of cobalt per day for two shifts,” reports finishing superintendent Dan Morrison. “We make an addition at the end of second shift, so when we arrive in the morning everything’s mixed in well. It enables us to start up and start plating very well with no rejects.” National uses mechanical agitation to eliminate any possibility of bath stratification and to distribute additions throughout the large tank.

According to Morrison, National checks solution pH hourly. “The process runs at pH between 8.5 and 9. It’s a two-minute test and goes very quickly. If you let the pH go really low or high, or if you get the cobalt and tin out of range, you can change the color pretty significantly. Color can go from blue or darker to somewhat lighter,” he explains.

Pavco, Inc. VP and director of R&D Michael Marzano says deposit color is driven by solution pH, which affects the composition of the alloy being plated. “Essentially, pH controls the rate of deposition of the cobalt and tin, and you wind up with a different alloy than what you want,” he explains. “Deposits typically range from about 90/10 tin/cobalt to about 80/20.

Sluder says National tries to run close to the lower ratio. “We’re in the 80/20 range. It seems to give the right color, and salt-spray test results were comparable to our hex chrome process.”

Switching to the tin cobalt chemistry has also simplified waste treatment. “We can’t violate now, because neither tin nor cobalt is listed as hazardous yet,” explains Sluder. “Someday, we may have to treat waste. Any time you’re putting metals into a sanitary district you have to be careful. But we’re not putting a lot of metal in there anyway.

“We do have to keep the waste treatment system separate from the nickel waste because of the chelating agent used in the tin cobalt chemistry,” he says. “It’s not a really strong chelator, but it’s strong enough that it would chelate the nickel.”

National is still in the process of quantifying its cost savings and productivity benefits, but to Sluder, the main advantage of tin cobalt is easy to articulate: “Hex chrome is gone, all gone. Waste treatment issues with chrome are eliminated, and we have no issues with permissible exposure limits,” he says.

The switch has also enabled National to eliminate outsourcing of some plating, which it was doing during periods of high demand. “We were sending out parts to be chrome plated,” Sluder says. “In fact, we used to have two other finishers doing chrome plating for us. This year, we don’t anticipate having to use them. Our production has gone up to the point where we don’t need outside platers anymore.”

Pavco’s version of a tin cobalt alloy chemistry, called PavCoTing, provides appearance and corrosion resistance comparable to chrome plating. According to Pavco, the low-metal bath can plate at high current densities, yet maintains good throwing power. The company says other attributes include:

A regular steel tank lined with PVC is adequate, and anodes can be type 304 or 316 stainless steel or high-density graphite with stainless steel hooks. Pavco recommends filtration using a 5-25 μm filter cartridge packed with a non-cellulose filter aid or activated carbon at a rate of 1 to 2 tank turnovers per hour.