Back to School in Switch to Powder Coating

Fleetwood Group had an idea it wasn’t getting the best results from its liquid spray applications, so it did its homework to find a solution for its perplexing problems.

Fleetwood is in a unique position in that 75 percent of its desks and other furniture are manufactured and sold to schools and universities during a four-month period in the summertime.

Throughput and capacity are critical during the summer, when orders are received from schools and universities, and when the products must be out the door before the first day of classes.

Jeff Pett (left), Fleetwood’s vice president of operations, discusses parts being coated at the facility with Tim Helferich, who runs the metal and coating part of the operation.

Among the Parker Ionics equipment included in the project are two GX8500A powder coating gun systems with 60-liter hoppers.

School furnishings manufacturer Fleetwood Group knows all about learning new things. The Holland, Michigan, facility had an idea it wasn’t getting the best results from its liquid spray applications, so it did its homework to find a solution for its perplexing problems.

Jeff Pett, Fleetwood’s vice president of operations, says a combination of new management and a new design scheme for its school desks and equipment supported the idea of switching from liquid to powder coating. 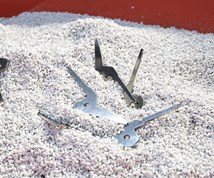 “We’ve always had an issue with color change using liquid applications,” Pett says. “Then we had some new designers join our company, and from an aesthetic perspective, they really started asking if we could look at going to powder coating.”

At first, Pett and his operations team wasn’t﻿ too thrilled with this idea of changing its coating application. Fleetwood had applied a liquid coat for “a long, long time,” and change was something Pett says the team wasn’t﻿ actively looking to undertake without seeing substantial cost savings.

“Our designers were always asking us to look at switching,” he says. “But we said, ‘Eh,’ we’re not really looking to change from an operational standpoint.”

When the team looked at costs and efficiencies, however, it quickly realized there were some inherent benefits to switching to a powder application.

Benefits of a Switch to Powder

“When we got into to the numbers and details, we started to see what it would cost to run the operation, and what kind of throughput we could achieve,” Pett explains. “That is when we started to see some major benefits that made us really move forward.”

Fleetwood is in a unique position in that 75 percent of its desks and other furniture are manufactured and sold to schools and universities during a four-month period in the summertime, so throughput and capacity are critical during that time, and the products must be out the door before the first day of classes.

“Last year, we reached our peak painting capacity for a few weeks during the summer, so it definitely was a concern for us,” Pett says. “When we saw that we could substantially increase our capacity by switching to powder coating, and reduce some of our operating costs, too, it got a lot more interesting for us.”

In October 2017, Fleetwood reached out to its pretreatment chemical supplier, ChemQuest, and rep Dale Mulder for his perspective and advice, and Mulder, who has worked with the Fleetwood team for more than 18 years, was highly in favor of the switch.

“When I sat down with them, they really did their research and knew the true benefits of changing systems,” he says.

One of the first calls Mulder made after that meeting was to Parker Ionics President John Cole, who has had numerous experiences converting manufacturers from liquid to powder operations.

Mulder realized that, even though Fleetwood had already decided to switch to powder coating, it would need more guidance on designing the proper booths and line systems, as well as help in training its employees on the proper coating techniques.

“The biggest challenge with a new system is dialing in the maximum transfer efficiencies,” he says. “That is the key to any powder coating system, and I knew John was one of the best in the business at teaching customers how to learn it and maintain it.”

Parker Ionics is the U.S. subsidiary of Nihon Parkerizing Co. of Japan and manufactures advanced powder coating systems, spray booths and guns. The company’s﻿ products are known for enhanced transfer efficiency, component flexibility and low maintenance, and that is what Cole sought to teach the Fleetwood team about.

Cole’s first step was to make sure Fleetwood had the infrastructure to support a powder coating system that would do the job it wanted done. Of major importance was the condition and capabilities of the facility’s existing cure oven.

“They needed to go from a low-temperature cure to a high-temperature cure, and there are some definite considerations that we all needed to look at,” Cole says. “They really didn’t have any space to expand the oven, so we had to use what they had, and we had to make it work for them.”

Cole brought in PPG to supply the powder coating system, which immediately started working with Mulder to run test trials on how well the oven performed and determine the proper temperatures for curing the powder coating.

“Most people make a mistake when they don’t consider whether their existing oven will give them the capacity they need,” Cole says. “We assumed we were okay on the pretreatment side, but we really had to make sure the curing stage worked.”

The Parker Ionics equipment included in the project was a Q-Flo 7200 conveyorized powder coating booth, two GX8500A powder coating gun systems with 60-liter hoppers, and a Kwik Change semi-automatic color change system for the handgun units that handles four colors and can be expanded to eight colors.

After making sure the capacities were appropriate, Cole brought the Fleetwood team to the Parker Ionics headquarters in Detroit, Michigan, to show some of the equipment the company would be installing.

“I like to bring customers in who have not had a lot of experience in powder coating to our facility and let them see how things work, and to get a feel for how the process will function in their facility,” Cole says. “We encourage them to bring some of their own parts, and we take them right into the booth and let them spray the parts so they can get a sense just what it will be like.”

What was obvious to the Fleetwood team—and to Parker Ionics’ team, as well—was that the Fleetwood painters were going to need a lot of training to get used to spraying powder instead of liquid on parts.

“They really had no clue all what it took to spray powder, and we see that a lot,” Cole says. “There is a lot more to it than just holding a gun and pressing the trigger.”

Everyone agreed that it would not be a wise move for the coating staff to go from spraying liquid to spraying powder in a live production process without adequate training from Parker Ionics. That training began almost immediately.

“We set the line speed up exactly as it would be in their facility, and we started teaching them the correct way to do things,” Cole says. “We started off with some basic powder coating fundamentals, but then we let them ease into it until all of the painters became comfortable with the process and speed.”

This training at the Parker Ionics facility was another money-saving proposition for Fleetwood: Instead of shutting down its own line for four to five days after the equipment was installed so staff could be trained on the equipment, Parker Ionics opened up its facility in advance of the actual installation at the Fleetwood plant to smooth out the training wrinkles.

“A painter learns better when he doesn’t have production pressure on him,” Cole added.

Tim Helferich, who runs the metal and coating part of the Fleetwood operation, says one of the company’s﻿ initial hesitations in switching to a powder coating system was the training challenge.

“Our guys were all very efficient painters who knew what they were doing,” he says. “But it was intimidating to change things up for them and have them coat in a way they’ve never done before.”

The training was slow-going at first, but eventually the Fleetwood coaters took to Cole’s techniques, and they were off and running.

“I would say within 10 hours each of our painters knew what they were doing and were very comfortable with a powder gun,” Helferich says.

Rick Kelly, Fleetwood’s﻿ paint team leader, says he has always wanted to convert to a powder coating system because he knew of its strengths and advantages, and he was excited to see the conversion actually take place.

“The amount of product you can push through a powder coating system as opposed to a wet line system is often three times more,” he says. “In addition, the quality of the paint is much better. This was a great change for us.”

The new system has already been a game-changer for for the company in terms of higher throughput and better coating. Within a week of the conversion to the powder system, line speed was back to five feet per minute, and throughput was double that of the old wet system.

“The line output went through the roof,” Pett says.

All in all, the investment was less of a risk than the Fleetwood team ever imagined, especially after taking into account the 200 percent throughput the shop expects to see very soon.

“We knew we wanted a better system, but until we went to John’s place at Parker Ionics and heard his philosophy on the way to coat parts, and how you want a wall of parts in front of you, that is so different from wet paint, it really sold us,” Pett says. “The return on investment was ridiculously fast. Even though this project really wasn’t in the budget, once we saw the potential, it was an easy justification.”