Clarifying the role of film formation and anode-sludge creation in connection with the use of phosphorus-containing copper anodes in electroplating.

There is a significant amount of misinformation and misunderstanding about film formation and anode-sludge creation in connection with the use of phosphorus-containing copper anodes in electroplating. In this article, I will try to clarify the process.

Phosphorus is added to copper for various reasons. It is a deoxidizer in molten copper, it substantially reduces the electrical conductivity of the metal and it affects other properties of the metal as well. It is also used in copper anodes for electroplating, because, together with chlorides in an electroplating bath, it will form a black film on the anode surface. This film inhibits acid corrosion of the anode and greatly reduces copper particulate formation in the electrolyte. This beneficial effect reduces the probability of particulate-caused roughness on the object being plated. For example, when electroplating printed circuit boards, this protective black film prevents copper particles from short-circuiting between traces on the board.

Formation of the black film requires three components: phosphorous in the anode, chloride ions in the acid-copper electrolyte and the flow of electrical current from the anode through the electrolyte to the cathode (part being plated). Consequently, the amounts of these three constituents has great effect on film formation, film thickness and film adherence to the surface of the anode. Let’s discuss these in turn. 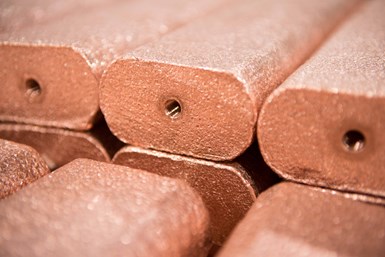 Phosphorous-copper anodes used in acid-copper electrolytes may have a range of phosphorous content, from 20 ppm (0.020%) up to 1000 ppm (0.10%) or more depending on the plating process and electrical current density between the anode and cathode. For most electroplating applications including printed circuit board (PCB), plating on plastics (POP), and Gereral Metal Finishing (GMF) applications, the phosphorous content is between 0.040% and 0.065%. For  high speed plating operations  higher amounts of phosphorus are often used.

The electrical current density employed in the plating bath will vary depending on the particular process. Higher current flow between the anode and cathode measured as amperes per square foot  (ASF) will generally increase the deposition speed of the plating process. However, the current density must be controlled to produce the plated-metal quality required for the application. The allowable current density will depend on many factors, including electrolyte copper and acid content, electrolyte temperature, electrolyte circulation in the tank, the anode bag material and weave, and the reagents added to the electrolyte to obtain the surface characteristics required for proper copper electrodeposition on the surface being coated. There are many factors controlling the allowable current density, which are beyond the scope of this discussion.

Black film formation — How it works

As the anode dissolves, more phosphorous is exposed and the black film thickens. Eventually, as the anode shrinks and falls lower in the anode basket, the black film sloughs off and settles to the bottom of the anode bag. This is the so-called anode sludge. The sludge will also contain impurity elements not soluble in the acid-copper electrolyte. Soluble impurities dissolve in the electrolyte and will be removed by the applicable electrolyte processing scheme. Minute levels of impurities found in copper anodes meeting accepted, well-documented purity standards have a negligible effect on; filming, sludge generation and the volume of sludge produced.

It is extremely important to understand the higher the phosphorous content of the anode at any given anode current density, the greater the amount of anode filming occurs therefore, the greater the amount of anode sludge is produced. At low chloride content in the bath, the black film tends to be thin. As the chloride content increases, the black film will be thicker. As noted above, if the chloride content gets in the range of 150 ppm, the character of the film will change becoming grayish-white with a characteristic greasiness to the touch. It will become non-conductive, anode polarization will occur and plating will stop. 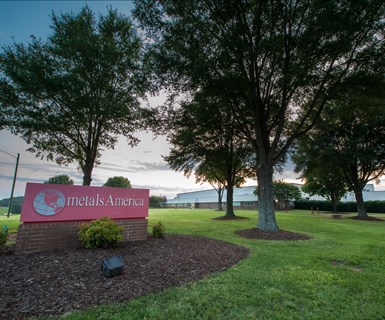 Dick Strachan has a BS in Chemical Engineering from Northeastern University and an MS and a PhD in Metallurgy from MIT. He has worked in the copper industry including for Kennecott Copper Company and it’s subsidiaries for many years and as Technical Director for IMC MetalsAmerica. His specialties include the continuous casting of copper, electrorefining of copper and copper electroplating. He is a Certified Electro Finisher (CEF) and has written and spoken internationally concerning copper electroplating processes and anode quality.