How To Do Business With the CEO

Appears in Print as: 'How To Do Business With the CEO'


Dress, act and speak like one. Wearing a suit and tie and communicating with a high degree of confidence and precision can give you access to the big business deals. 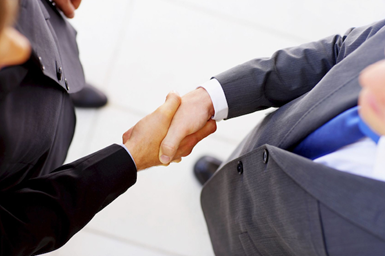 The day started like any other. Up ahead of the sun, showered, picked out a business suit and donned it, along with a nice oxford and a seasonal necktie. Socks, Allen-Edmonds, leather belt, good to go.

I hadn’t been working at the finishing company too long; maybe a week or two, when one of the well-intentioned members of the business development team pulled me aside in confidence.  “People in surface finishing,” he said like he was offering sage advice, “don’t wear suits.  If you keep dressing like that when we visit our customers then people will think you’re different.”

Early in 2021, I launched the TechEd Podcast (www.techedpodcast.com), available on Spotify, iTunes, Amazon, Google and elsewhere.  Guests, to name a few, have included the U.S. Assistant Secretary of Labor, the former Governor of Wisconsin and the former U.S. Secretary of Health and Human Services, the Founder of Ashley Furniture, the Chairmen and CEOs of Rockwell Automation and Snap-on and the President and CEO of paint robot manufacturer FANUC America, by far the largest robotics and CNC provider on the globe.

Many have been blown away that a podcast launched at the beginning of this year has already attracted internationally recognizable celebrities in the world of manufacturing, technology and education.  How did we do it?

I learned early in my career that as businesspeople, we get access to the people like whom we dress, act and speak.  I was 25 years of age when, through serendipity (the president and vice-president of my employer being abruptly fired by the board of directors), I found myself in the position of vice-president and concurrently doing everything I could to come across as a person more mature than his years.  I found that wearing a suit and tie and communicating with a high degree of confidence and precision added five to 10 years to others’ perceptions of my age and correspondingly increased my credibility with them.

I’m not the only one who figured this out.  While in his mid-twenties, a friend of mine started what became an extremely successful homebuilding company.  His trick for appearing more seasoned?  He carried a pair of non-corrective (i.e. fake) reading glasses with him and perched them on his nose while reviewing drawings and blueprints.  He claimed this practice added 20 years to people’s perception of his age and elevated his credibility.

Watch business network CNBC for a morning and see how many Fortune 500 CEOs show up for their interviews without a suit jacket.  Virtually none.  Search Google for Fortune 500 CEO and see how many of them are dressed professionally for their photos. All. Forget that a properly tailored suit fits as comfortably as a cozy pair of pajamas, when we dress like a CEO we are treated like one, by our customers, our suppliers and other partners.  I will never forget the time that I was standing in a line of about 75 people at the airport check-in counter when a customer service representative left her station, walked to the back of the line and ushered me, dressed in a suit and tie, to the very front to check me in for my flight and send me on the way to security – 30 minutes ahead of everyone else.

Comporting myself as a CEO in attire, speech and action, even before I was one, gave me access to people I may never have been able to meet otherwise.  My success in getting past the front desk gatekeeper while conducting cold calls skyrocketed.  If a customer’s president or plant general manager walked past while I stood at the finishing line I was much more successful in getting an introduction and engaging them in conversation that often led to additional business.  I even had to get used to people calling me “sir” while I traversed the customer’s offices and plant floor – who wouldn’t want that level of respect from their customers?

From time to time I’ll hear someone say, “sales people who call on the plant floor should dress like plant floor supervisors so they’re relatable.” Fine if that’s your thing but hear this. I’ve never been thrown out of a plant for being overdressed but I know many sales people who will never have access to the C-Suite because of the way they dress, act and talk.  Believe me, the biggest deals – the ones that make or break financial fortunes and careers - happen in the C-Suite.

I’m not always this stiff.  If I’m in the office amongst my colleagues, with no customer or outside meetings scheduled, you’re apt to catch me in a ball cap and a hoodie. Find me with a client or prospect, though, and you’ll see me in a jacket and tie.  Every time.  Why?

Because we get to do business with those like whom we dress, act and speak.