For robotic painting, the key word is density 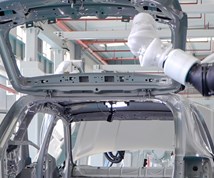 “For example, typical automotive paint booth widths have been reduced by 25%, from approximately 20 ft to 15 ft, and the overall length of their paint booths has been reduced 50% by using high-density layouts with wall- or shelf-mounted robots,” Schuetz says.

“For every square foot of reduced spray booth floor space, exhaust and air make-up requirements will be reduced significantly.”

According to Schuetz, a robotic spray booth measuring 20 × 40 ft operating at a typical 60 ft/min of exhaust airflow velocity requires 48,000 cfm of make-up air. A spray booth measuring 15 × 20 ft operating at 60 ft/min requires only 18,000 cfm—a 62.5% reduction in supply air. This lowers costs by reducing heating or cooling requirements for make-up air and cuts exhaust, which may require incineration or another method to reduce VOCs before being released into the atmosphere.

Schuetz says new wall- or shelf-mounted paint robots have other advantages over conventional machines. They can access hard-to-reach areas of the part or vehicle body more effectively than traditional floor-mounted models. And, because robots are above most paint overspray, maintenance costs are reduced. “In addition, large parts or assemblies can be painted with multiple robots that are wall- or shelf-mounted at different height levels, allowing one robot to paint the lower portion of a part while another paints the upper portion,” he explains. “With the help of anti-collision software, multiple robots can work in very close proximity to each other in the spray booth.”

New wall- or shelf-mounted robots also have slim, hollow robot arms with internally routed air lines, paint hoses, and cables that allow the robot arm and spray gun to access difficult-to-reach areas. “On many automotive, truck and other paint lines, the same model wall- or shelf-mounted robots can also open and close doors, hoods and trunk lids, as needed, due to increased payload,” Schuetz says.

Technology advances include robot controllers that allow coordination of robot motion with that of servo positioners to provide smooth, seam-free paint application. “Many types of part positioners, as well as wall- or ceiling-mounted robot tracks and robot transport beams, can be used in paint environments,” Schuetz says. “However, these part positioners and robot transporters might need to be modified due to explosion-proof requirements for application of flammable paint materials.”

In the U.S., Factory Mutual-approved controllers with air purge systems are the standard for most paint robots powered by electric servo motors, according to Schuetz. The robot controller is typically located outside of the actual paint booth to increase safety and reduce costs. Menu-driven gun spray control features, color change and other functions are available from an explosion-proof robot teach pendant, which can be used inside the spray booth.

Other productivity-enhancing tools include PC-based robot simulation software that allows creation and testing of high-density layouts, spray paths, cycle times and other process parameters. “Simulation can effectively model painting of a part or vehicle on the computer to determine the number of robots required, eliminate interference between robots, optimize the robot location and reduce spray booth size, Schuetz says. “When simulations are used, painting robots can be installed and operational in up to 30% less time.

“Simulation tools can also be used to develop robot painting programs off-line,” he adds. “These programs can be downloaded to the robot controller and run with little or no touch-up programming. Off-line programming increases productivity by allowing the actual robots remain modified.”