Instrument provides a better way to check for soluble salts 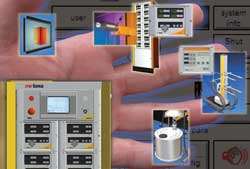 ARP Instruments’ SSM (top) replaces the syringes and patches used in the Bresle method of soluble salt concentration on surfaces to be painted.

ARP Instruments’ SSM (top) replaces the syringes and patches used in the Bresle method of soluble salt concentration on surfaces to be painted.

Marine environments are known for taking a toll on many types of protective coatings. For organic coatings in particular, the presence of soluble salts on a surface before coating can seriously impact the service life of applied protective coatings.

For this reason, the U.S. Navy has set stringent requirements for maximum allowable soluble salt concentrations in various applications. The Navy’s approved test protocol requires that surface contaminants be extracted and analyzed using the Bresle patch method, which involves application of a flexible cell (patch) to the surface and injection by syringe of deionized water. Surface salts are dissolved into this solution, which is then removed and tested for conductivity.

Navy test procedures specify a minimum of five measurements depending on the surface area being inspected, and also quantify acceptable conductivity ranges for both immersed and non-immersed applications.

The Bresle patch method has several limitations. Using it can be tedious. It requires approximately four min per test patch and leaves residue on the surface. Each patch costs $6.50 and can be used only once. It requires manual record-keeping and its use of syringes poses a safety hazard for users.

A new inspection tool that can replace the Bresle patch method for soluble salt determination has been developed by ARP Instruments Inc. (Garrisonville, VA). The patented Soluble Salt Meter (SSM) uses a test protocol that exactly duplicates the Bresle method while automating the process and eliminating use of consumables. The device and procedure were recently approved as an authorized alternative to the Bresle patch method.

The SSM uses a hand-held design that is easily transportable. It automatically meters deionized water, extracts surface salts, records soluble salt measurements and rinses the measurement chamber. Menu buttons allow easy navigation, and LEDs provide notification of operation cycle mode and completion of measurement. Data recording is automatic, and data can be uploaded to a PC for later analysis.

According to ARP Instruments, the complete test sequence using the SSM requires only one min, 10 sec. The six-step method—the Bresle patch requires 17 steps—involves attaching the meter to the surface to be measured, then injecting deionized water into the measurement chamber by pressing the dose bottle. The meter automatically agitates the solution for approximately 20 sec, takes a conductivity reading, displays the results on a LCD screen and stores values electronically. The user then removes the SSM, wipes remaining water from the surface, and flushes the meter by turning it over and injecting water from the dose bottle.

ARP says the instrument and related procedure improves the time, quality, safety and accuracy of analysis by eliminating use of syringe needles, allowing paperless data acquisition and storage, automating water dosing and washing, and eliminating consumables and residue left behind from Bresle patches.