Boston manufacturer, Affordable Interior Systems (AIS), moves its finishing operation above ground to save space in a new facility.

The systems at AIS include two Rohner hand booths, and a new Nordson system that allows for 30-45 second color changes.

AIS designed a mezzanine for all of the powder coating operations, and elevated all of the cure ovens.

AIS decided to make its own affordable brand of commercial office furniture and seating.

The new coating system allows two shifts running parts at as many as 150,000 per day, almost a 400-percent increase in capacity.

AIS gained about 30,000 square feet of space by elevating the finishing process to the mezzanine.

The system includes two external boilers for heating stage one of the washer system, which will hold 6,500 gallons for cleaning.

Moving seven separate manufacturing operations under one roof presents its own logistical problems, the biggest of which is where to fit everything.

So when Affordable Interior Systems (AIS), makers of commercial office furniture and seating, decided to consolidate its numerous manufacturing facilities into one large operations plant in Leominster, Massachusetts, starting in 2014, they knew that space would be a priority and scarce. 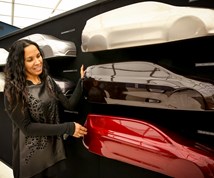 “We moved seven buildings into one,” says Keith LeBlanc, AIS’s manufacturing engineering manager. “It was a two-year process, but it makes us so much more efficient.”

The company’s powder coating operation was the last to be moved into the new 600,000-square-foot plant, and over the past year, AIS officials realized they had a space shortage.

With the industrial finishing operation making the last move, consideration was quickly given on how to make it all fit and still have the same workspace and workflow.

“We just realized we were running out of space,” LeBlanc says.

AIS solved the problem by looking upwards. Engineers were brought in to design a plan to mezzanine all of the powder coating operations, and to elevate all of the cure ovens.

Below the coating operation is the assembly departments, which makes what the company has become well-known for, feature-rich product lines that entice designers and meet immediate and future needs of end users.

The facility—referred to as “Tucker” because of its location on Tucker Drive—houses the warehouse, distribution, shipping, receiving, woodshop, finishing, assembly, engineering and management. About 400 employees work in this location, with an additional 200 relocating into the building by the end of 2017.

It wasn’t exactly a huge stretch for AIS to go up with its coating line; at its old plant, a small liquid booth and the curing ovens were elevated, so the company had some experience with the concept.

The original plan was to isolate the powder coating operation as much as they could in a back area of the sprawling facility, but problems arose when they started laying out the floor plan and were losing space to other operations that began creeping into the designated coating area.

“We came to the conclusion that the coating line wasn't going to work properly if we continued with the design we had,” LeBlanc says. “So we went back to the drawing board.”

Ingenuity is something AIS has been known for since the company was founded in 1989. Bruce Platzman and Arthur Maxwell started the company by purchasing used office furniture and re-manufacturing it to be as close to new as possible, and then sold it for a lower price than new furniture.

The company was doubling and tripling sales year-over-year, but they were beholden to finding used office furniture they could buy. That’s when they decided to start manufacturing their own brand of office furniture, and did it in plants that were often miles apart.

Today, the company employs 520 people with annual sales of more than $125 million.

Industry Week magazine recognized AIS as one of the top 25 manufacturing plants in North America, and it is the first maker of office systems to earn certification for measuring and reducing carbon emissions to zero.

Roughly half of the building is geared toward the woodshop, light assembly and shipping, and the other part is the assembly, coating and warehousing. The decision to elevate the finishing process necessitated working more closely with their coating equipment installers.

“We already had the quotes in on the finishing equipment, so we had to go back and work with everyone again when we decided to reconfigure the lines,” LeBlanc says. “We knew the quotes would change, but long-term, the space we could get out of this was much more valuable to us.”

A key component was the design of the mezzanine, which had to carry the loads of the powder coating equipment and ovens. Once engineers accomplished that task, then the equipment manufacturers could begin installation of the new line.

The washer is 96-feet long and is set up in three stages, says Dave Gagne, AIS’s powder coating technician. General Automatic Transfer (GAT) from Fenton, Missouri, designed the new powder coating line, which includes a pair of Nordson Corp. spray booths, one of which was a Colormax system they moved from their previous location with 12 automatic guns, as well as a new Colormax 2 system with 16 automatic guns.

“This new line runs about 22 feet per minute, which is a big improvement for us,” Gagne says.
The system includes two external boilers for heating stage one of the washer system, which will hold 6,500 gallons for cleaning. There is no internal heater tube in the washer.

“This is really a system like no other that I have seen,” Gagne says. “I have been in the powder industry for 42 years now and have seen it all, or close to it. There aren’t many finishing systems like this in the world. Everything except the washer is 10 feet in the air, including the spray room.”

Before the move, AIS’s coating line was handling about 40,000 parts per day, which included an older Millbanks system installed back in 1998. LeBlanc says that system maxed out at around 10 feet per minute in line speed and was entirely spray-to-waste. The other system was a Cincinnati model line that handled roughly 85 percent of the parts and ran at about 15 feet a minute.

LeBlanc says the old system fed two lines into the washer and coating line, and when they were studying a new system, looked at variable options: moving existing equipment, buying individual separate units, and also looking at the risk factors of having units that are common.

“What we ended up with was a single washer with two separate tunnels, a three-stage washer but a single tank for each portal,” he says. “We also went with the single dry-off oven, and two different cure ovens.”

The new system allows two shifts running parts, and LeBlanc is hoping to get 150,000 parts per day, an almost 400-percent increase in capacity.

“We intentionally oversized this system,” LeBlanc says. “The last thing we wanted to do was put in this brand-new system configured the way we have, and then have to come back later and add to it.”

AIS is expecting to pick up market share over the next few years, and the key to that growth will be the production line, including how fast parts can be coated and cured.

“We are not the biggest player out there in the furniture industry, but we are picking up market share on a daily basis,” LeBlanc says. “It all comes down to lead time and flexibility. Everybody wants to work with us because we are very flexible.”

Lead time is one reason AIS decided to go with top-quality suppliers and equipment.

“Any hiccup in our production schedule and in our paint lines has a ripple effect in everything we do,” LeBlanc says. “When we had the two older systems, we learned a lot about our shortcomings. We tried to address those items as much as we could with the newer equipment.”

Originally published in the August 2017 issue.