Paul Springer has 40-plus years in running a coating operation.

SpringCo supplies Maxion Wheels, which supplies parts to every major truck maker in the world. SpringCo applies an ecoat, followed by a powder coat to the wheels that provides a solid protective coating.

SpringCo has two ecoat paint lines: the small profile line has a coating window of 18′ x 24′ x 30” and a 10-stage zinc phosphate pretreatment system and has a 4,000-gallon cathodic epoxy ecoat tank.

SpringCo offers different coatings that can be used in conjunction with each other to provide corrosion protection, including ecoat, powder coatings and zinc plating.

Owner Paul Springer says he spends just over 90 minutes a day in the shop, but makes the most of his time talking with customers and employees.

SpringCo’s ecoat line is massive at 2,200 feet in length, capable of doing parts 90 inches long and up to 500 pounds.

Paul Springer is about one-third of the way through giving a tour of his sprawling 11-acre, 250,000-square-foot coating facility in Cleveland, Ohio, and his guest is already sucking wind. The owner of SpringCo Metal Coating, meanwhile, is doing just fine as a spry 71-year-old.

“I get up every morning at 4 a.m. to work out,” Springer says. “I used to have a trainer I worked with, but now I’m on my own with it. It keeps me young.” 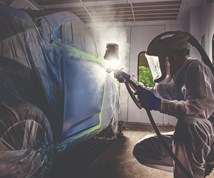 If you want to outwork Springer and his company, then you better rise much earlier than him. Although he says he is officially in his facility about 90 minutes a day, he makes every minute count and spends it making walk-throughs and checking in with his management team, which consists mainly of his children.

He smiles, waves and chats to the more than 260 employees he has on staff at his facility, which has some of the largest electrocoat and powder coating lines operating in North America, coating automotive parts from some of the biggest OEMs in the game.

“I have people who have been with me 20 and 30 years,” he says on this tour, often stopping to shake hands with employees and chatting them up. “They don’t seem to leave me. They either retire or die. I must be doing something right.”

Springer has done a lot correctly in the 40-plus years he has run a coating operation. An affable gent who is lean and tall, he comes across as a friendly sort who loves his job and the industry, but is also as knowledgeable as they come about the science behind the process. He has a doctorate in chemical engineering from Ohio State University, and knows better than anyone about the chemistries and applications of the pretreatments and coatings in his facility, especially since he designed and built most of them himself by scratch decades ago.

Did we mention how large and expansive the operation of SpringCo Metal Coating is? On a typical day, 200 semitractor-trailers will haul finished parts out the door. He does $20 million in sales a year, and spends over $4 million on his pretreatment, ecoat and powder coat supplies alone, making him one of the largest single buyers of the products in North America.

“I am a plum customer for a lot of suppliers,” Springer says, and adds that PPG has been his supplier for more than 35 years.

Most of the components that SpringCo coats are for customers, such as General Motors, where they coat trailer hitches and crossmembers for the company’s heavy-duty pickup trucks and SUVs. His other large customer is Maxion Wheels, which supplies parts to every major truck maker in the world. SpringCo applies an ecoat, followed by a powder coat to the wheels that provides a solid protective coating.

“We send seven semis out each day filled with 74-pound truck rims,” Springer says. “They leave here today and by tomorrow they will be on the trucks and SUVs and out the door at the plant. And then we do it all over again tomorrow.”

Springer got his start in the early 1970s in the lab at Diamond Shamrock, where he worked on the initial development of Dacromet, which was one of the first products that used a zinc and chromium coating application. He moved to the marketing side of the company before deciding to launch his own finishing line to apply Dacromet. He bought a used, 1,300-foot conveyorized finishing system from a closed plant that included a 6-stage washer, large spray booths and a bake oven, which took 20 semitractor-trailers to haul to rented space in Cleveland, and Lake Erie Metal Coatings was born.

After hitting “snake eyes,” as Springer calls it, with the new line and orders from Detroit automakers, the business struggled as designs for cars changed, and so did the parts and the orders. Fortunately, Chevrolet’s Corvette needed hold-down plates for its rear spoiler assembly and Springer got the order just in time to save his business — thanks to a requirement to put a sealer over a microcrystalline zinc phosphate coating.

In 1979, Lake Erie Metal Coatings installed a powder coating line in its shop to add a decorative coating that provided a quality appearance that could not be done with the dip coatings they were using, and even more customers were added to the company’s client list.

Along the way, Springer changed his company name to SpringCo Metal Coating and soon needed to buy buildings around his original location on Elmwood Avenue for his expanded operations. He now owns three large buildings that total 250,000 square feet, which includes a large fabrication shop and even a repair center for the dozens of forklifts the shop uses.

“When you have a large part of the facility just dedicated to repairing and maintaining forklifts, then you know you have a large operation,” says Springer, who adds that his annual payroll is closing in at $8 million.

Nonfamily members also play a big role in the company, as Ed Oesterling and Jamie Harmon supervise some of the facility’s largest lines, with each having about 70 employees reporting to them and generating about $7 million in sales per line. The ecoat line is massive at 2,200 feet in length, capable of doing parts 90 inches long and up to 500 pounds.

Springer has been offered big bucks to sell the company, but he would like his heirs to run the operation in the future.

“I just sit back and watch them all,” he says of his children. “Are they going to be capable of keeping it going? I hope so. I can sell tomorrow if I wanted, but I really want them to thrive and succeed.”

Years ago, Springer opened a plant in North Carolina to satisfy a customer’s need, which took him from 50 employees to more than 150 in less than 12 months. That didn’t last long.

“I didn’t like doing that and I told myself that, if I was going to grow, I wanted to do it in my own backyard where I could watch everything,” he says.

Even in his 70s, Springer has more energy than people half his age, and he attributes it to staying healthy, working out and not killing himself by staying at the office all day.

“I’m in the office an hour and half each day, and that includes going to lunch,” he says with a chuckle. “I have great managers who have been with me 10, 20 and 30 years. Bob Wolf designs and builds all of our equipment and has been with me for 37 years. My production manager started with me when he was 17 years old in 1982. If you haven’t been with me for 20 years or so, then you are a newbie.”