Famis, a family owned and operated, Miami-based industrial chemicals and finishes distributor that provides sales, service and consulting to the industrial paint and finishing markets in Florida, has celebrated its 50th anniversary.

Mario Hernandez Sr. fled Cuba in 1959 as a 17-year-old boy. Lost at sea for eight days, he was eventually rescued by a Norwegian freight boat off the coast of Panama City, Florida. With only the clothes on his back, he was sent to Miami for Immigration and Naturalization processing. With no family, no friends and nowhere to go, Hernandez enlisted in the U.S. Army. Empowered by his newfound freedom and as a Cuban National, he hoped to be deployed to help liberate Cuba. The opportunity never came, so he spent the next two years in the Army learning a trade: paint and maintenance of military equipment. 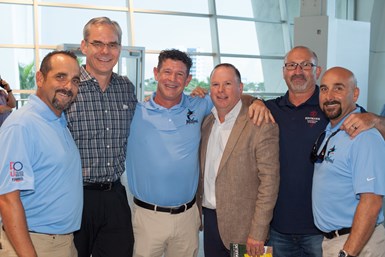 The company was also recently honored with a city proclamation for Famis Day and held a special celebration with longtime industry partners and friends at Marlins Park.

Upon his honorable discharge, Hernandez moved back to Miami and began working at Miami Air International as a painter. A foreman at first, he was then promoted to shift manager and then supervisor. Unfortunately, the early days of the paint industry were harsh and eventually took a toll on his health. Always pushing ahead, he requested a position change to stock clerk at a local paint company, Jerome Taude Co. Hernandez’ hard work ethic rewarded him and, once again, he found himself quickly ascending the ranks. While at Jerome Taude Co., he gained extensive professional experience in the trade. He was trained as a batch maker, color matcher and ultimately became a salesman. In 1969, he decided to take a leap of faith and become his own boss. It was then that Hernandez founded Florida Auto Marine Industrial Supply, which later became known as Famis. The company was also recently honored with a city proclamation for Famis Day and held a special celebration with longtime industry partners and friends at Marlins Park.

Hernandez introduced his children to the business. Today, two of his sons, Mario Hernandez Jr. and Oscar Hernandez, along with their business partner, Ricardo Miyares, continue the 50-year commitment to quality and service that Hernandez started so long ago. Famis employs over 40 employees and is a staple in the industrial coatings and chemical industry in the southeastern U.S., with distribution throughout six states and the Caribbean.

Despite its national presence, Famis is still family owned and operated in Miami. The company was also recently honored with a city proclamation for Famis Day and held a special celebration with longtime industry partners and friends at Marlins Park.