George Giering III has been a loyal Products Finishing reader for 50+ years. Turns out there are a lot of people like him.
#editorial

Nary a time goes by when I visit a finishing operation that someone doesn’t tell me that they’ve been a longtime reader of this magazine, and they explain in great passion how much the publication has helped them over the years with a tip here, a time saver there, or even a way to bank a dime.

Some will say they’ve been a reader for 20 years or more, a few even 30-plus, but they all say the same thing: that their introduction to the industry was through our monthly pub, and they have been a loyal reader. 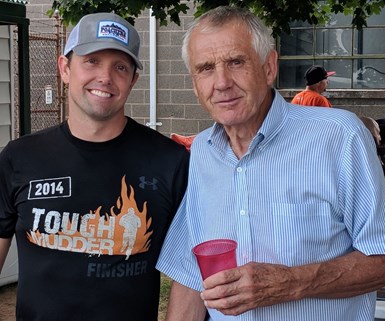 George Giering III, at right, and his son, George F. Giering Jr., at a company picnic.

Then I met George Giering III, who pretty much is the clubhouse leader when it comes to perusing Products Finishing on a regular basis. It was back in 1963 — a full year before I was even born — that George began reading the magazine while working in his father’s shop, Giering Metal Finishing, in Hamden, Connecticut. He started there as a teenager, doing the odd jobs that an owner’s son is often asked to do, such as sweeping floors and scraping paint off the walls of booths, but it was a start.

“I’d be covered in solvent-borne paint when I would go home, and I’d have to put newspaper down in the front seat of my car or else I would stick to the seats,” says Giering, now 76 and still at the top of his game.

He says he reads the issue when it arrives each month, just as he has been doing for the past 56 years.

“I learn things all the time on how to save a nickel here and there, and how to do things a better way,” he says. “I live by you guys.”

He mentions that the annual Products Finishing Supplier Directory and Technology Guide sits on his desk next to his phone, just as it has for five decades.

He is the second generation owner of the shop. George Giering II started it in the late 1930s as a way to hand paint dental chairs with a brush in his spare time while working at Eli Whitney Gun Factory in Hamden; yes, that Eli Whitney of the cotton gin fame. When World War II broke out, Giering II evolved the shop into electrostatic finishing processes, applying coatings for the armed forces. In 1954, Giering Metal Finishing became his full-time job, and he soon began working with manufacturing companies throughout the Northeastern U.S.

By the 1960s, Giering Metal Finishing had expanded its services to offer pretreatments, plating, anodizing, hand spray and automated finishing, and that’s when Giering III started working after school and on weekends at his dad’s shop. He became a voracious reader of Products Finishing, sifting through the how-to articles and learning about the new products on the market. He soon went off to the military and then college, but kept up his reading habits because he knew someday he would probably be joining his father at Giering Metal Finishing, although he really wasn’t sure.

“I was too busy chasing skirts to think about what I wanted to do with my life,” he says. But then real life took over; as he finished up college, Giering II passed away, leaving a gaping hole in the company for someone to serve as sales manager and drum up new business.

“We had a lot of great technical guys, but none were sales people,” Giering says. “That’s when I hit the road, visiting companies and telling them about us. Someone had to visit our customers and bring in new ones. That was me.”

When Giering took over as president in 1969, he wanted to explore the new surface treatment he had read about in Products Finishing, a European technology called powder coating. He read articles and spoke to a few suppliers, and one day decided he would buy a powder coating line from a company in Tennessee. He flew to Chicago and rented a car to drive south, but on the way down he was pulled over by state police in Tennessee on a rainy afternoon, but he knew he wasn’t speeding.

“I kept seeing all these cars pulled over along the highway and people standing on overpasses, but I didn’t know what they were doing,” he says. “Turns out it was a tornado warning, and they had a law that cars had to pull over and hide under the underpass until the storm went through. How did I know that?”

Besides almost getting blown to Missouri, the trip was beneficial in that Giering Metal Finishing did indeed add powder coating, and along the way added liquid applications and electrocoat, while also dropping the plating operations.

In 2001, George Giering IV joined the company as a third generation heir-apparent to his father. The shop now has three locations, with two in Hamden and one in Waterbury. Giering IV has two sons that Giering III hopes will also someday join the finishing operation.

“I’ve had a great career, and I’ve enjoyed what I have been doing,” Giering III says. “I’m getting to be an old guy, and maybe I’ll work just a few hours a week, I don’t know. Maybe I’ll even get my name in Products Finishing someday.”