It’s a Catch-22 for Craig Walters, president of Premier Finishing in Stockton, CA, as he watches cabinets coming off his paint line and knows it will be populated with kidney dialysis control equipment and will be used by someone in dire need.
#masking #medical 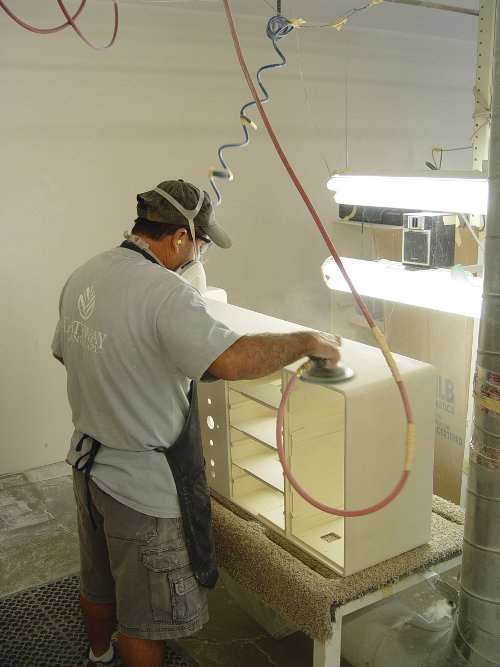 Premier inserts masks in 38 places, they perform some milling and drilling holes in specific locations using their lasers to help insure the fixtures are be able to hit the holes in the right spot in the cabinet

Premier inserts masks in 38 places, they perform some milling and drilling holes in specific locations using their lasers to help insure the fixtures are be able to hit the holes in the right spot in the cabinet

It’s a Catch-22 for Craig Walters, president of Premier Finishing in Stockton, CA, as he watches cabinets coming off his paint line and knows it will be populated with kidney dialysis control equipment and will be used by someone in dire need.

“I hate to think about all the people that are using what we produce,” says Walters, whose company has both liquid and powder lines and specializes in medical and other hi-tech products.

But with more patients needing the life-saving treatment – and an expected boom in the need for the machines in the coming years –employees at Premier Finishing can take solace knowing they are helping people live another day.

Premier’s client owns 70% of the market share in dialysis machines in North America and supplies about 50% of new dialysis units to China, which currently serves about 120,000 dialysis patients but is expected to grow to over 500,000 in the next decade.

In fact, the machines used to be finished by another company who lost the job because of defects in the paint finish and overall inconsistency. That’s where Premier Finishing stepped in about five years ago.

“They actually had a source, and they were looking for a second source and went through about seven different suppliers trying to get that second source,” Walters says. “The supplier’s engineer that came out to see us was looking at our process because the supplier they had for 10 years was not producing parts that consistently me their demanding specifications. They had random recurring chipping and blistering problems.”

Walters and his partner, Thom Foulks, jumped at the chance to get the job. After studying the problem, they believed the problem was something other than paint, possibly a combination of both paint and plastic. They ran tests, which led to a new production system that includes a final breathing stage where the dried cabinet is covered with a fine linen cloth cover for a specific period of time. Following this process allows the internal gases within the plastic to slowing escape before it is filled with electronics thus avoiding the dramatic bubbling that used to be such problem.  The problem has not been seen since.

Premier Finishing is now settled in with 95 employees in its 15th year after seeing as many as 125 staffers working in the plant, specializes in powder and liquid coating, EMI-RFI Shielding, production silk-screening, pad-printing, laser ablation and light mechanical assembly.

Medical equipment makes up about 30% of their revenues, or about $2.5 million a year in sales. Besides the 180 or more kidney dialysis cabinets they produce each week, Premier also finishes two ultra-sound housings and the related mating. Some of the components are powder coated, some are liquid paint, and there is also screen, pad printing and assembly involved in Premier’s production.

One of their customers making the ultra-sound devices moved their production to China a few years ago. Now, much of that work is coming back to Premier because there have simply been too many quality issues. Premier is now working to return those products into their ongoing production lines.

And that’s what made Premier Finishing stand out from the rest: being able to pull off the almost improbable when others fail. But Walters says high expectations are what come along with working in the medical industry.

“I’d say that their expectations are perfection,” Walters says of the medical OEMs. “We strive to be perfect, and we get an extremely high quality rating.”

Preparation is the key, Walters says. That may be tough working on different surfaces, but Premier has been able to pull it off. The dialysis cabinets are structural foam plastic, and the ultra-sound housings are mostly magnesium die-cast parts.

“In all cases, it’s a lot of sanding and a lot of filling,” he says. “It requires a lot of prep work.”

Premier has also carved out its niche in being able to successfully mask fixtures, with an in-house department that makes nothing but fixtures for masking, bead blasting and silk screening. Often they involve compressed air, vacuum or even magnets.

Take, for example, the dialysis cabinets: Premier inserts masks in 38 places, they perform some milling and drilling holes in specific locations using their lasers to help insure the fixtures are be able to hit the holes in the right spot in the cabinet. They then sand the parting line to blend it in to look like one piece, apply a spray fill primer, sand the spray fill, and then a finish coat.

Premier also has been counted on by OEMs to perform light assembly, too, calling it “value added assembly” because in nearly every finishing project they are doing something on the mechanical side. For a customer who makes surgical lasers, Premier provides post-paint operations that includes fastening a metal shield   which Premier has made at a local sheet metal supplier   mounting hinges, gasket strips, heatstaking mating plastic pieces and affixing multiple labels in precise locations.

“It’s very important for us to offer that to our customers,” Walters says. “Instead of having the medical company spend time and resources on those aspects of assembly, it allows them to concentrate on clean-room activities like vacuum pumps, laser diodes and circuit boards; things that only they can do.”

If it sounds like a car assembly line, it’s because Premier also has two automotive lines, including robotic painters that have also been used on aerospace parts, too.

“Medical has been   as we all would love to say   that recession proof industry,” Walters says. “Even though with Mr. Obama, there’s many who are scared that could change. But we’re very proud to be a medical coater.”