Like many Cubs fans in Chicagoland, Rich Macary at Arlington Plating Co. (APC) in Palatine, Illinois, will start his day by checking to see if the wind is blowing in or out that day. Gusts that blow in may not be good for business, as the result may not match the effort of trying to reach the fences. When business is good — and the flags are stiff from the wind blowing out — then most attempts are home run balls that are good days in the plating business at Arlington. 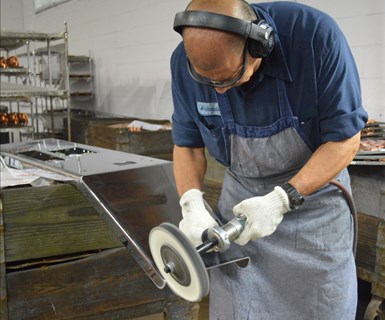 APC has an extensive polishing and buffing department, one that has been a mainstay of the shop for more than 60 years.

In 2018, the gusts were coming in hard, taking with it a customer that represented almost 50% of APC’s overall business. Talk about Bartman reaching over the foul line to grasp victory from the hands of the diehard Cubbie fans.

“It was a tough blow,” says Macary, the president of APC since 2000. “We lost business for a variety of reasons and it was a huge exhale for us.”

APC had been grooving along the last half decade, adding capacity with new lines and getting approvals and qualifications it had sought to expand its business even further. Polishing witness marks can also be removed with a range of buff treatments and compounds, and the treatments vary in texture and stiffness depending on the application/use and the buff compound materials which actually affect the finishing.

In 2017, it spent $2 million on a new anodizing line to bring in the customer that it eventually lost a year later. The 5,000-square-foot line had 44 process tanks and was fully automated, producing MIL-A-8625 Type II (sulfuric) anodizing with high pH sealants, die coloring and electrocolor capabilities for parts up to 100 inches in length. The line offers bright dip, lacquer/post-dip and satin finishing applications, and met pH 13.0 requirements mandated by the automotive industry for exterior trim applications. With this automated line, Macary was hoping the new hardcoat capabilities would allow APC to expand its market reach into food process equipment, medical and aerospace applications that require wear resistance, corrosion protection and appearance. 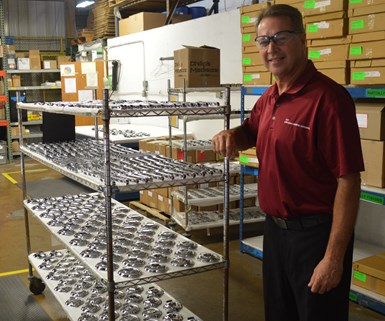 Rich Macary at Arlington Plating Co. in Palatine, Illinois, has been the president of APC since 2000.

But that changed when the customer pulled up stakes through no fault of APC, which sent the company’s management team on a mission to not only fill that void but to also expand and diversify the shop’s customer base. Suffice to say, 2019 was a year of recouping business with new customers and expanding its relationship with existing ones too.

“Instead of a $5 million customer we had for that one line, we now have five customers who bring us $1 million each,” Macary says. “It gives us a little more breathing room and we are not so dependent on one customer any longer. We think this puts us in a stronger position.”

In 2017, APC spent $2 million on a new anodizing line to bring in the customer that they eventually lost a year later.

APC services the automotive, motorcycle, electronics, consumer and other markets, priding itself on producing flawless, high-performance finishes on aluminum, magnesium, steel and stainless steel, as well as copper alloys and zinc die cast.

The shop has been recognized several times as a Products Finishing Top Shop and celebrated a rebirth over the last decade or more with Macary at the helm after struggling in the late 1990s. At that time, Macary says, APC was a typical Chicago-area plating operation, servicing its many customers in one of the nation’s largest cities with two delivery trucks and customers within driving distance. 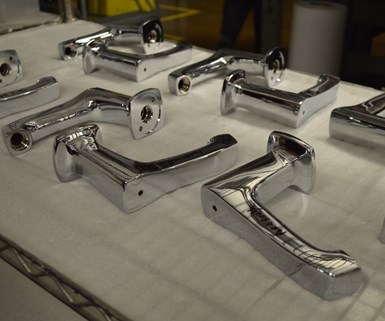 Castings with parting lines of sufficient size may need to be polished with an 80-grit abrasive and then finished with a progressively higher grit sequence of polishing abrasives.

The shop was struggling when Macary was brought in as sales and marketing director after he spent many years selling chemicals in the plating industry. He soon found himself as president of the shop when further upheaval caused some management changes.

While APC was able to pull in some work from Harley-Davidson, Macary also decided to focus APC’s core business on specializing in plating on aluminum, zinc die castings and magnesium.

“Our new focus was away from job shop work to more contract manufacturing where we would run jobs weekly instead of occasionally,” he says.

Expanding Customer Base Outside of Chicago 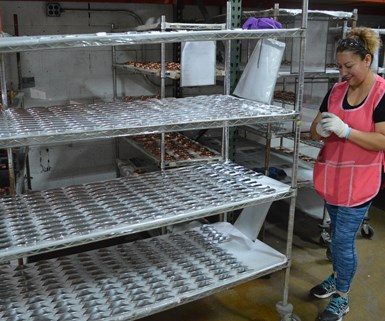 An additional change was transforming its relationship with employees through an Employee Stock Ownership Program (ESOP) initiated in 2016.

Another big change: less than 10% of its work comes from the Chicago area and it has customers as far away as California, New York and even Italy, supplying to General Motors, Ford, Chrysler, Harley-Davidson and Indian Motorcycle, among others.

“We are more of a specialty coater instead of just a job shop,” Macary says. “We used to do any load that a customer could bring in, to where now we are more of a focused manufacturing operation, where almost every job we do has to be qualified and meet certain specifications. It really is a different business today.”

APC has an extensive polishing and buffing department, one that has been a mainstay of the shop for more than 60 years. Castings with parting lines of sufficient size may need to be polished with an 80-grit abrasive and then finished with a progressively higher grit sequence of polishing abrasives, something which APC has gained industry notoriety for perfecting. Polishing witness marks can also be removed with a range of buff treatments and compounds, and the treatments vary in texture and stiffness, depending on the application/use and the buff compound materials that actually affect the finishing.

“Copper Buffing” is a metal finishing strategy APC uses which adds two extra steps to the finishing process, but produces the smoothest finish for chrome plating product. With the copper buffing approach, Macary says a magnesium, zinc or aluminum die casting would first get polished and buffed, followed by a second step to deposit a thick layer of copper. The third step is to buff the copper and then nickel-chrome plate the part, a process that produces what Macary calls “Show Chrome.” 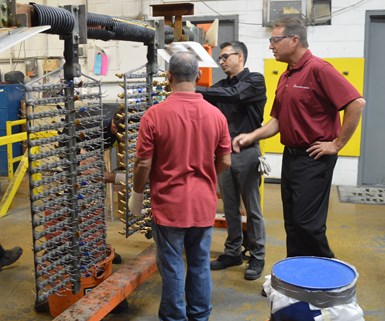 An additional change was transforming its relationship with employees through an Employee Stock Ownership Program (ESOP), initiated in 2016. The Gollob family had owned Arlington Plating since the 1970s, but now all the employees share in the growth of the company. The plan works like this: each year, employees gain more shares of stock and, as the company continues to prosper, those shares grow in value. Employees can directly see the results of all of their hard work.

“Despite what we went through in the past year, I think we have a very good business model and we are always tweaking it to better fit what it is that we need to do,” he says. “By the diversification of our portfolio, we are making our business a little more solid afoot.”

Macary also realizes that the wind often changes direction and what could be blowing in one moment can be gusting outward at any moment, no matter how well you anticipate market changes.

“Things don’t always happen as you plan them,” he says. “We planned that anodizing line for that big customer and then lost the business. Now it’s practically full with some great customers and we are very happy to be working with them and growing with them.”