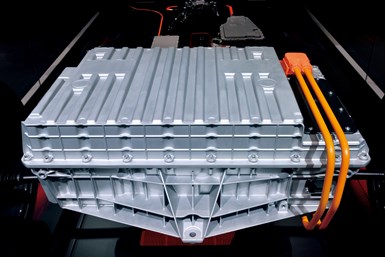 Lithium ion batteries are the preferred technology being used in EV, although other types of batteries have begun emerging on the market
Photo Credit: iStockphoto.com – licensed by Hubbard-Hall

General Motors (GM) has bold plans to accelerate the growth of the electric vehicle (EV) industry, as evidenced by its commitment to releasing multiple electric vehicle models retailing for under $30,000. Hubbard-Hall, with a decade of experience in the battery cell market, has teamed up with lithium-ion battery makers to provide cleaning chemistry that not only helps with supply chain, but also drives down the cost of batteries themselves.

General Motors chair and CEO Mary Barra has stated that the company’s electric vehicle plans include 30 new EV, more than two-thirds of which will be available in North America. The announcement is an indication of how fast electric vehicle technology is evolving.

“This means that 40% of GM’s U.S. vehicles will be battery-electric by the end of 2025,” says AutoBeat editor-in-chief Gary Vasilash, who has been covering the automotive industry for over 30 years.

Lowering the price of EV

GM followed Barra’s pronouncement with news that a pending breakthrough in battery chemistry will cut the price of its electric vehicles to match the price of cars powered by internal combustion engines within five years. The technology also will increase the range per charge to as much as 450 miles.

According to a November 19 Associated Press article, GM’s product development chief promised a small electric SUV that will cost less than $30,000 and pledged to roll out 30 battery-powered models worldwide by 2025. Nearly all current electric vehicles cost more than $30,000.

“Not only does this chemistry help GM regarding the supply chain,” he says, “But it will help drive down the cost of batteries to below $100 per kW/h.”

GM and its battery supplier LG Chem are building a $2.3-billion plant in Ohio to mass-produce batteries. Vasilash points out that Barra has hinted that GM could sell batteries to other vehicle manufacturers and ride-share companies.

Lithium ion batteries are the preferred technology being used in EV, although other types of batteries have begun emerging on the market, too. The lithium ion batteries for EV come in various configurations. There are large cell packs that act as one battery and the entire pack can be charged, but most of the battery packs used in EV are made up of thousands of little batteries grouped together.

The smaller battery cans are made of steel and nickel. There are two separate processes used to manufacture and finish the cartridges, based on the need: one process forms the small steel cylinder first, then adds a plated nickel finish; the other process places a nickel clad on top of the steel cylinder, after which the battery is formed from the material.

Hubbard-Hall has been supplying cleaning chemistries for both the processes for several years, and their involvement in the EV industry has been growing steadily — the company’s largest cleaning customer is making EV battery cans. Hubbard-Hall has partnered with a battery cell manufacturer for several large automakers to help design a cleaning process that is flexible and consistent.

Many operations are using Hubbard-Hall’s Aquaease chemistries to clean the battery cans according to specifications. That includes setting up an aqueous cleaning system that sometimes uses a heavy-duty caustic alkaline cleaner followed by a water-based rust preventative. Hubbard-Hall specifically developed a unique Aquaease application for the EV battery makers, and has two different types of Aquaease at some facilities because they run different processes entirely.

The versatility of Aquaease has been embraced by many manufacturers and finishers because of its consistent performance in various scenarios. For example, plating nickel over the steel battery casing leaves a cleaner surface as compared to the nickel cladding process. There are often micro-fractures on the surface of the nickel clad, which allow for a higher tendency for corrosion. It also generates smaller micro-smuts that have to be dealt with. The Aquaease for that process removes a lot of lube that those parts are saturated in, as well as the smut.

Opportunities for manufacturers and finishers

GM’s recent announcement is an indication of how fast electric vehicle technology is evolving. As OEMs accelerate their plans in the EV sector, the production of EV batteries presents an area of growth for manufacturers and finishers. There’s no time like the present for manufacturing and finishing operations to learn more about the processes and chemistries involved.