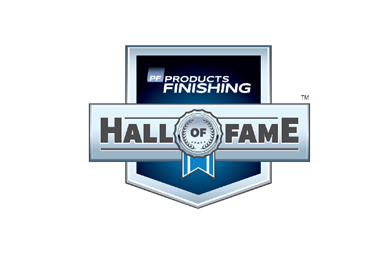 They were chosen based on voting by a panel of 15 industry veterans. Here is a look at the 2019 class:

Frank Altmayer is a Master Surface Finisher and an AESF Fellow who is technical education director of the AESF Foundation and NASF. He was owner of Scientific Control Laboratories until 2007. Altmayer has 45 years of experience in metal finishing and waste treatment systems. He was the recipient of the AESF Past Presidents Award, NAMF Award of Special Recognition, AESF Leadership Award, AESF Fellowship Award, Chicago Branch AESF Geldzahler Service Award and NASF Award of Special Recognition.

How Artificial Intelligence Will Revolutionize Your Business

Dr. Arthur Brace, Ph.D., was head of the chemistry division at Alcan Aluminium in England, and was in demand internationally as a lecturer. He published numerous papers, was author of three anodizing books, and was a Fellow of the American Electroplaters and Metal Finishers Society. Brace was one of the founders of the International Hard Anodizing Association and helped set up the Aluminum Anodizers Council. He served as president of the AESF Society International Branch and was on the Council of the Institute of Materials Finishing as chairman of its Anodizing Group. He passed away in 2017.

Ken Kreeger was a major force in the powder coating industry for more than five decades. His career at Nordson Corp. started in 1974 and lasted until his passing in 2018. Kreeger held 20 patents and was a speaker at conferences, trade shows and workshops. He was a contributing author to the first edition of the highly regarded industry manual Powder Coating: The Complete Finisher’s Handbook, among other works. Kreeger was instrumental in educating and mentoring countless Powder Coating Institute members and professionals. He was honored with a Powder Coating Institute Hall of Fame Award in 2010.

Marc LeBaron joined his family plating company, Lincoln Industries, after college and rose to become president in 1982, and chairman and CEO in 2001. The company has more than $100 million in sales, almost 600 employees and a national customer base. Recognized for many years as one of the nation’s best companies to work for, LeBaron crafted a culture that is nationally recognized and a major reason why the company has grown more than 15 percent each year over the last 15 years.

Ray Lucas is a second-generation owner of Valley Chrome Plating, a multimillion-dollar company that manufactures semi-truck bumpers and accessories. He has served as MFANC president twice, was the first NASF president, and served on the Sur/Fin Steering Committee, Government Advisory Committee, Awards Committee and is chair of the NASF Fellow Committee. Lucas was awarded the Silvio Taormina Memorial award, John Mickey award, NAMF Award of Merit and MFANC lifetime achievement award

Joseph Manzoli began in the finishing industry in 1991 and his Toronto-based Colourfast Corp. is an award-winning shop, winning Products Finishing's Top Shops three years in a row. The company was the first shop to be ISO certified in 2001 and recently his team has created new finishes through research and development that were honored by the Canadian government as industry-leading innovations. Manzoli also has held positions as a board of directors member for Berklee Global Jazz Institute and Jazz FM 91.1 Toronto, and currently operates a Level 1 Collective as a consulting firm for business development.

Jerry Poll was editor of Products Finishing magazine through four decades, and was an invaluable supporter of the finishing industry, organizing a number of annual conferences. He started as assistant editor of Products Finishing in 1954 and later editor, where he interviewed managers and owners of countless finishing facilities to write articles. Poll was active in trade and technical organizations associated with industrial plating and painting/powder coating, and served on committees and boards of the American Electroplaters Society. He was secretary of the board of the Metal Finishing Suppliers Association. He was the 1979 recipient of the Charles Henry Proctor Memorial Leadership Award from the AES and the 1996 recipient of the August Munning Commemorative Award of Merit from the Metal Finishing Suppliers Association.

William Safranek was assistant chief of the electrochemical engineering division at Battelle Memorial Institute in Columbus, Ohio, and was closely associated with various research projects aimed at developing finishes for protection against corrosion and finding new methods for producing metals. Safranek gained industrial experience working in electroplating at the Alemite Die Casting Company and Apollo Metal Works. He authored or co-authored over 20 technical articles and chapters in books, and was active in the ASTM Committee B-8 on electrodeposited metals. He served as chairman of numerous plating committees for the AES in Columbus, and was past president of the Columbus Branch of the AES. Safranek was the recipient of the AES/AESF Scientific Achievement Award in 1979 for his career work. He passed away in 1993.

Donald Snyder, Ph.D., was worldwide technical manager at Atotech until his retirement in 2011, with a career spanning more than 40 years and including more than 200 published papers and presentations. He worked in various managerial roles starting as research director in 1970. His dedicated service to the AESF and NASF over the years includes the board of directors and membership on many boards and committees. Snyder chaired many of these entities and also served on the AESF Foundation Board of Trustees, including a term as president. In 2010, he was presented with the NASF Scientific Achievement Award. In 2015, he received the Frederick Lowenheim Memorial Award from the ASTM International Committee and, in 2016, he was honored as an NASF Fellow.