In the metal finishing industry, the thickness of a coating can dictate the functionality, appearance and cost of a final product. Coating thicknesses are typically found in the range from 0.1 to 85+ microns, depending on the application, and it is imperative that the thickness of coatings are monitored and controlled. Proper coating thickness is required to ensure consistent part performance and appearance.

Why plating thickness is important 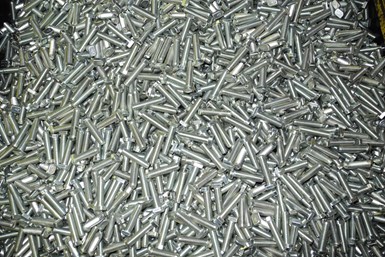 Plating thickness is crucial for functional coatings since the thickness of the coating is proportional to its durability. For example, to improve corrosion resistance, zinc coatings are commonly employed over steel. Zinc undergoes galvanic corrosion when in electrical contact with steel, meaning it is more electrochemically active and corrodes preferentially when compared to steel. Products designed to work in corrosive environments will require a minimum thickness of zinc to guarantee the lifetime of the final product. Similarly, copper deposits used for conductivity applications will have strict thickness requirements to make certain that the deposit has the correct current-carrying capacity. 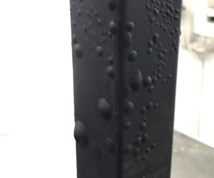 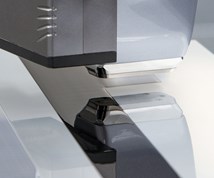 When insufficient plate is observed, often the electroplating bath has a source of inefficiency. There are numerous examples of an inefficiency that causes insufficient plating thickness in electroplating processes. For example, in chrome plating, poor chromium coverage can be a result of low chromium concentration or a low chromium to catalyst ratio. A lower chromium content reduces the ability of the metal to deposit evenly across the substrate and can result in partial coverage and premature part failure. Partial coverage can also be observed in electroless nickel deposits when the bath becomes over-stabilized. Stabilizers present in electroless nickel baths help keep nickel in solution. When present in excess, however, stabilizers prevent the nickel from plating out onto the substrate and can result in poor nickel coverage. Contaminants can also affect the throw of an electroplating solution. The throw of a solution is the ability to plate in recesses or low current density (LCD) areas. For example, in chloride zinc electroplating, contamination from metals like copper, lead and cadmium can result in poor LCD plating and lead to pinpoint rusting in those areas.

In contrast with insufficient plating thickness, excessive plating thickness is often associated with HCD areas on a part. Since different parts have varying geometries and different degrees of HCD, buildup in these areas is a constant battle amongst electroplaters. Many chemical suppliers, like Dynamix, provide proprietary chemical additives to help level deposits by preventing buildup. Often called “carriers” or “levelers,” these additives interact with HCD areas and provide a consistent plating environment across the entirety of the substrate to provide a uniform and leveled deposit. For parts with very unique geometries, consider using conforming anodes to compensate for areas of LCD/HCD to ensure no buildup is found in HCD areas.

Partial coverage is identified as when the substrate or subsequent coatings have bare spots after plating. This defect can be visible, which detracts from the appearance of the product and can also lead to premature part failure. Voids in the coating can introduce corrosion sites on the substrate or cause damages/discoloration from UV degradation, all of which compromise the integrity of the product.

Insufficient coating thicknesses can result in brittle deposits. Plated deposits have a tendency to imitate the crystal structure of the underlying metal substrate during the initial atomic layers. This phenomenon is exemplified in decorative chrome applications, where chromium can achieve its lustrous appearance from the underlying bright nickel deposit. While this feature has aesthetically pleasing results, the assumed crystal structure also imposes stress and brittleness in the deposit. Especially in functional coatings like sulphamate nickel, the brittleness achieved by insufficient plating can be disastrous. 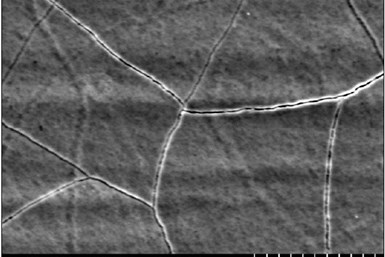 Excessive plating thickness can also result in brittle deposits. Excessive buildup introduces a great deal of internal stress within the metal deposit, which can cause the deposit to crack, leading to structural and visible damage. Finally, unnecessary buildup is costly as it wastes resources and time to achieve. 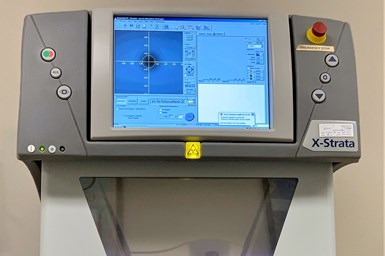 One instrument commonly used for this function is the X-ray fluorescence spectrometer (XRF). This non-destructive instrument uses X-rays to probe the thickness of different metallic coatings. The XRF operates by focusing an X-ray on the sample, which excites the metal coating, causing it to emit a unique, secondary X-ray. The XRF measures the secondary X-ray produced from the coating and, depending on the energy and intensity of the radiation, the instrument can calculate both the composition and thickness of the coating with extreme accuracy. Using different laboratory standards, an XRF can measure the thickness and composition of any metallic coating over any substrate. While the laboratory-grade XRF at Dynamix is very expensive and requires training and regular maintenance, handheld XRFs (HXRF) are becoming widely available. HXRFs operate under the same principle as laboratory XRFs and provide accurate readings while being more affordable and easier to use. While the XRF does provide reliable readings, it is difficult to measure layers that are composed of numerous elements, like metal oxide layers, or multilayered deposits consisting of the same element, like a semi-bright and bright nickel multilayer. As such, other measurement techniques are employed.

Another measurement method regularly used in the Dynamix lab is the simultaneous thickness and electrochemical potential (STEP) test. This is a destructive method usually employed to measure multiplex nickel products. This is a coulometric test, meaning the test measures anodic dissolution under a constant current. Based on differing sulfur content in different nickel layers (i.e. semi-bright vs. bright), the time it takes to dissolve each layer is related to the thickness of that layer. A difference in voltage indicates a change in sulfur content and thus can be used to differentiate between two different nickel layers. The STEP test can accurately measure different nickel thicknesses while also measuring the electrochemical potential between the two layers, which is a crucial requirement for a lot of automotive applications. The STEP test can be used to measure the thickness of numerous electroplated coatings, both single or multilayer, but, again, is most commonly used for nickel coatings. While this test is effective, it is a destructive test, so samples used for this test are scrapped after testing.