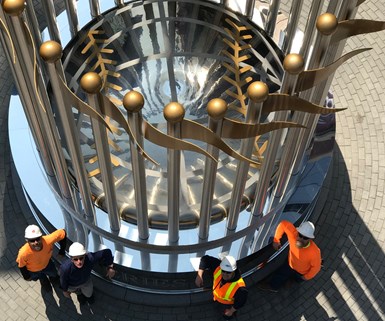 A stainless steel statue recently created for the St. Louis Cardinals — essentially a giant trophy replica — is over 30 feet tall and weighs about 6,000 pounds.  Images | Archetype

Wolkerstorfer Co. Inc. of New Brighton, Minnesota, a company celebrating 125 years in the metal finishing business, finishes some pretty big parts. Certified by a number of aerospace and industrial OEMS, the company has some sizable processing tanks. Currently, the majority of their work is for aerospace OEMs and the Department of Defense, but recently they made an exception.

The company was approached by Archetype, a Minneapolis-based design firm, for help with a championship monument for the St. Louis Cardinals based on the iconic World Series trophy. The statue — essentially a giant trophy replica — is over 30 feet tall and weighs about 6,000 pounds. Many of the monument’s components are stainless steel and required passivation, an immersion process designed to enhance the corrosion protection of stainless steel. Passivation works by removing free iron left behind from grinding and machining operations, as well as sulfur compounds that can cause the finish to fail.

Innovation Squared
Moving Your Shop to the Next Level New technology can be both enticing and threatening. Steve Schneider of John Schneider & As... 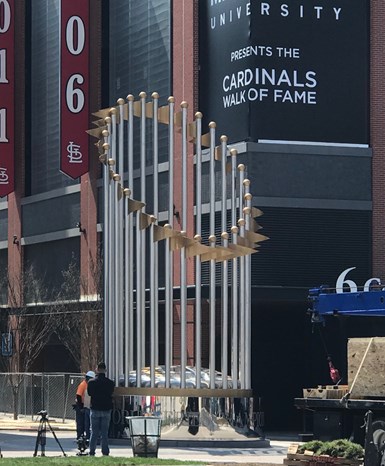 While passivation is a common process within the industry, not many finishers have tanks large enough to plate the large parts that comprise the monument, which include poles that measure up to 30 feet in length.

“In a common job shop, if you had passivation tank that was longer than 4 feet, that would be weird,” says Kurt Weamer, director of sales and marketing for Wolkerstorfer. “There’s only a handful of shops in the country that can handle a part that big.”

Wolkerstorfer primarily uses the large tanks for the aerospace and defense projects that make up the majority of its work.  The company can process parts up to 30 feet in length and 2,000 pounds. “We’re working on armament, radar systems — and that’s just big stuff,” says Weamer.

Colin Carpenter of Archetype found Wolkerstorfer while researching shops with the capability to passivate such large parts. Weamer was a bit skeptical at the initial job description, but found his interest peaked when Carpenter sent a picture of the World Series trophy. But there was a hurdle.

“This statue is for the Cardinals?!” Weamer joked, “I’m from Indiana.”

The two laughed about it and ultimately Wolkerstorfer agreed to take on the project, which involved treating the stainless steel panels, the pipes, the facia — everything on the monument that has a mirror finish. While the statue may have been a little outside the norm for Wolkerstorfer, the company is certainly open to a variety of work and the fun project makes one heck of a conversation piece.

Plus, who’s not going to jump at the chance to work on a giant World Series trophy? Even when it's for the Cardinals and you’re a die-hard Cubs fan.