PPG has provided an extensive roster of coatings to protect Las Vegas’s new Allegiant Stadium and enhance its appearance.
#construction 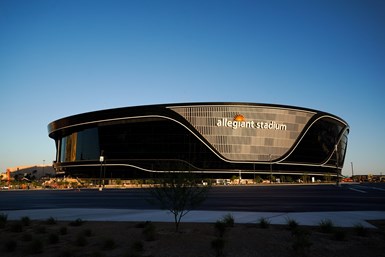 PPG (Pittsburgh, Penn.) recently announced that its paints, coatings and specialty materials were used in the construction of interior, exterior and structural surfaces of Allegiant Stadium, home of the Las Vegas Raiders. The stadium, with its distinctive black and silver colors, was unveiled to a national television audience on September 21 in primetime on Monday Night Football.

PPG provided an extensive roster of products to protect the venue and enhance its appearance.

PPG products used on the stadium incorporate protective and decorative coatings demanding the company’s full range of expertise in industrial, protective and architectural applications. The company’s PPG’AMERCOAT 68 HS and PPG PSX 700 coatings were selected for the project and custom-formulated to meet and match the team’s iconic silver and black uniforms.

PPG also formulated the signature colors in PPG DURANAR XL coatings for the venue’s glittering curtainwall. Based on PPG’s proprietary 70% polyvinylidene fluoride (PVDF) formulation, the four-layer coating system delivers abrasion and chemical resistance and has the ability to retain its bright color after prolonged sun exposure.

Texas Finishing Company (Carrollton, Texas) participated in the painting of aluminum extrusions and panels for the curtain wall system using PPG’s products. Steve Lockwood, Las Vegas Commercial Sales Rep for PPG says applying the coating at Texas Finishing’s plant worked well. “They’re equipped with all the right support for beams of this weight and you have a controlled environment.” The company’s horizontal paint line can coat up to a 30-foot extrusion. The company applies a chromate conversion coating pretreatment prior to painting.