From its signature primary mirror to thermal control for its instruments, the James Webb Space Telescope is enabled by gold coatings.
#vacuum-vapor #aerospace

Despite the many challenges of 2020, several exciting advancements happened for NASA’s space program during the course of the year, including astronauts launching from U.S. soil for the first time since the end of the Space Shuttle program in 2011 and the launch of the Perseverance robotic Mars rover in July. Among these important developments were several milestones accomplished with the assembly and testing of the James Webb Space Telescope (JWST).

The development of the JWST began in 1996 and the project has had numerous delays along the way. The telescope was initially planned for launch in 2007, but it has undergone redesigns and suffered setbacks, including a tear in the telescope’s sunshield during deployment testing in 2018. Nevertheless, the project has endured and, in spite of the COVID-19 pandemic, NASA managed to complete several critical tests of JWST’s systems during the course of 2020. In October, the telescope completed environmental testing, ensuring the fully assembled observatory can endure the vibrations it will experience during its rocket launch into space. In November, NASA reported successful deployment of the telescope’s tower assembly, which supports the telescope mirrors and instruments, separating them from the spacecraft element of the observatory. Finally, in December, the telescope’s five-layer sunshield was successfully deployed and tensioned. All good signs that the JWST is on track for its currently scheduled launch on October 31, 2021.

The JWST is the most powerful and complex space telescope ever built – 100 times more powerful than the Hubble telescope. Designed to explore the cosmos using infrared light, the telescope will allow astronomers to observe the most distant objects in the universe, providing images of stars, exoplanets and the first galaxies formed. To be a bit more specific, the JWST will observe galaxies that are 13 billion light-years away. To accomplish this, the telescope needs a large mirror that can reflect infrared light, which is key to being able to detect such distant images.

JWST’s primary mirror system comprises 21 mirrors, with 18 mirror segments — each 1.32 meters (4.3 feet) in diameter — working together as one large 21.3-foot (6.5-meter) mirror. A secondary mirror is positioned at the end of long booms, which are folded during launch and later deployed.

The mirrors themselves are made of beryllium and were shaped by Axsys Technologies (Cullman, Ala.) and polished by SSG/Tinsley (Richmond, Calif.). Beryllium was chosen for its stiffness and ability to provide the necessary stability at cryogenic temperatures — approximately -220°C (-364°F). This is important because JWST has to stay cold. As objects warm, they give off infrared light — which occupies the same spectrum the telescope seeks to capture. If the mirrors warm, the telescope’s ability to capture the light of distant galaxies would be hampered.

Aside from holding its shape across a range of temperatures, beryllium has additional attributes that helped determine its selection for the project. It is lightweight, which is important for any space launch — each mirror segment only weighs around 20 kilograms (46 pounds). It is also is a good electrical conductor. However, beryllium is not very reflective of infrared light. For that reason, JWST’s primary mirror system is coated with gold.

The JWST’s primary mirror is instantly recognizable and impressive with its reflective gold hexagonal component mirrors. Each of the mirrors is coated with about 0.12 ounce of gold to optimize it for the reflection of infrared light. The microscopically thin layer of gold is applied via vacuum vapor deposition by Quantum Coating Inc. (QCI, Moorestown, N.J.). The company invested two years of work prior to coating the first flight mirror. QCI added a coating facility and clean room to coat the mirror segments and developed the coating to meet performance specifications across such areas as uniformity, reflectance, durability, stress and cryogenic.

“We faced many technical challenges on the Webb mirror coating program,” said Ian Stevenson, director of coating at QCI. “One of the most daunting was that all flight hardware runs had to be executed without a single failure.”

The gold coating had to be exact — thick enough to entirely cover the mirror, yet thin enough to not cause any expansion or contraction in the mirrors due to temperature change.

The coating is applied by placing the mirrors inside a vacuum chamber. Intricate masking protects any areas that are to remain uncoated. Gold is heated to its liquid point — more than 2,500°F (1,371°C) — and is vaporized and injected into the chamber. The vaporized gold is deposited onto the mirror’s optical surface, resulting in a coating 120 nanometers thick (roughly 200 times thinner than a human hair). While impressive in appearance, the actual amount of gold used for the entire telescope doesn’t amount to much. It takes only 2.5 cubic centimeters — around 48 grams — of gold to cover JWST’s entire array of mirrors.

Not just the mirrors

The JWST is made up of three major components — the Optical Telescope Element (OTE), the Integrated Science Instrument Module (ISIM) and the Space Craft Element (SCE), which includes the spacecraft bus and the tennis-court sized sunshield. 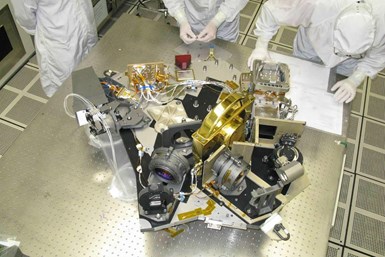 The mirrors aren’t the only place where you’ll find gold on the JWST. IR gold was also used for thermal control function on the telescope’s infrared cameras. For this work, NASA turned to Epner Technology. The company’s Laser Gold plating is a hard, electrochemically deposited gold coating that the National Institute of Standards and Technology (NIST, Gaithersburg, Md.) selected as the standard for infrared reflectivity with a result of 99 percent throughout the mid-infrared range of 2 to 14 microns.

According to David Epner, president of Epner Technology, NASA has been using Laser Gold for more than 35 years. The material’s heat-reflecting properties have enabled NASA missions as coating for spacecraft instruments on weather satellites, the Hubble camera housing, a beryllium housing on the Mercury Messenger spacecraft and instruments on the JWST.

“It was for critical thermal control function on both the near and mid-infrared cameras,” says Epner. 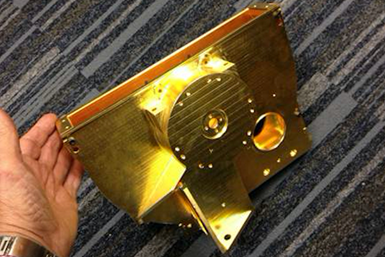 JWST’s Near Infrared Camera (NIRCam) observes an infrared wavelength range of 0.6 to 5 microns, while the the Mid-Infrared Instrument (MIRI) covers mid-infrared wavelengths from 4.9 to 28.8 microns. The two instruments are equipped with coronagraphs, mechanisms consisting of filters that allow for the observation of dim and distant objects by blocking light from brighter objects. Epner Technology’s Laser Gold was used to plate components for the coronagraphs, allowing for thermal control of the instruments.

Dawning of a new age

The James Webb Space Telescope will allow us to see farther than we ever have before, enabling us to learn more about the origins of the universe. With JWST’s gold-coated mirrors and instrument housings, surface finishing plays no small role in that endeavor.

The 1950s and 1960s are often referred to as the Golden Age of space exploration — a time when humanity took its first steps from Earth out into the stars. We are currently living in a new space age, with missions launching at a rapid rate, humans poised for a return to the moon and robotic missions taking us deeper and deeper into the cosmos. The ways in which manufacturers and finishers collaborate with NASA and contribute to space missions are a big part of that — a new golden age of space exploration indeed.